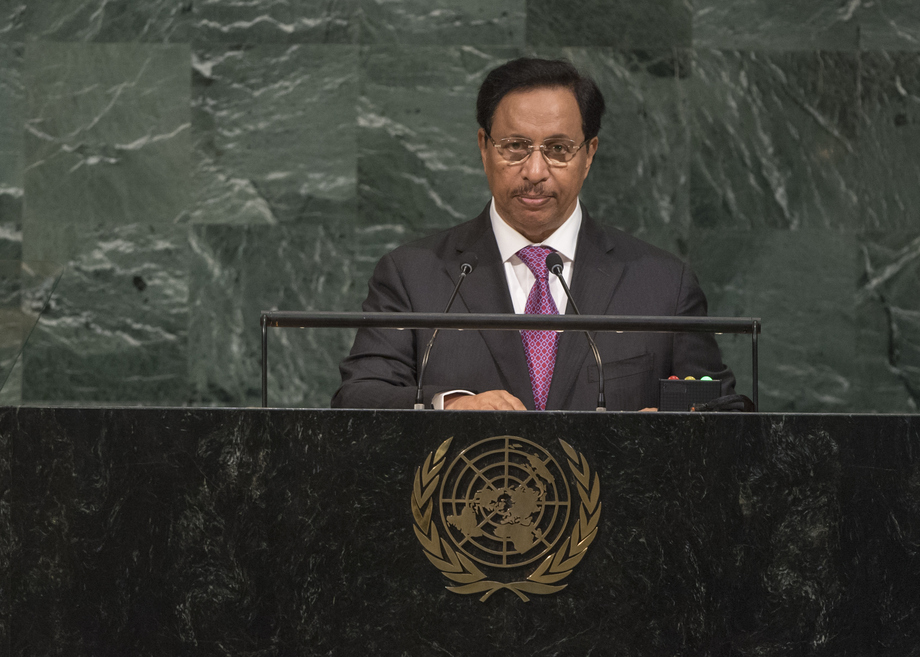 JABER AL-MUBARAK AL-HAMAD AL SABAH, Prime Minister of Kuwait, welcomed plans to restructure the United Nations Secretariat so as to make it more effective, and reiterated calls to reform the Security Council as well.  Calling also for the immediate cessation of all persecution of the Rohingya Muslim minority in Myanmar, he emphasized the need to grant that community citizenship.  Kuwait condemned terrorism in all its forms and supported international counter-terrorism actions, he said, stressing that ISIL violated the most basic principles of human rights.

On Iraq, he commended that country’s Government on its victory over ISIL and expressed hope that the trend of liberating territory and people from the hold of terrorists would continue.  Peace and stability must be restored in Iraq in order to begin efforts to rebuild and to allow refugees to return home.  As for the occupation of the Palestinian territories, he said the Arab cause had been “saturated” with United Nations resolutions as well as international and regional initiatives that were not implemented due to the intransigence of the Israeli occupying Power.  He condemned Israel’s violations at Haram al-Sharif (Al-Aqsa Mosque) in Jerusalem and categorically rejected all its illegal policies aimed at effecting “judaization” of the Holy City.

Turning to Syria, he noted that Kuwait had hosted three international donor conferences and co-chaired two more, but pointed out that not much had changed on the ground, despite those efforts.  The pace of the political track remained slow, he said, pointing out that despite six rounds of talks in Geneva over the past five years, progress continued to stall.  The parties to the conflict must come together and hold direct talks aimed at finding a peaceful political settlement, he emphasized.

Reaffirming Kuwait’s full commitment to Yemen’s unity, he rejected any interference in that country’s internal affairs, stressing that a solution must be based on the outcomes of the national dialogue, initiatives of the Gulf Cooperation Council countries and its implementation mechanisms, and all relevant Security Council resolutions.  He renewed calls for Iran to establish relations based on cooperation and non-interference in the internal affairs of States and to renounce practices that risked jeopardizing the region’s security.

Turning to the 2030 Agenda, he noted the significant challenges arising from humanity’s long “erroneous behavioural patterns”.  Stressing the need to curb climate change, he said the phenomenon represented the biggest impediment to sustainable development.  Kuwait would continue to mainstream the 2030 Agenda into its own national agenda by integrating it into the “New Kuwait” 2035 plan, which comprised seven pillars intended to transform the country into a financial, commercial, cultural and institutional hub.  Pledging that Kuwait would continue to shoulder its regional and international responsibilities, he underlined its commitment to helping developing and least developing countries by providing them with grants and soft loans.