H.E. Mr. Paolo Gentiloni, President of the Council of Ministers 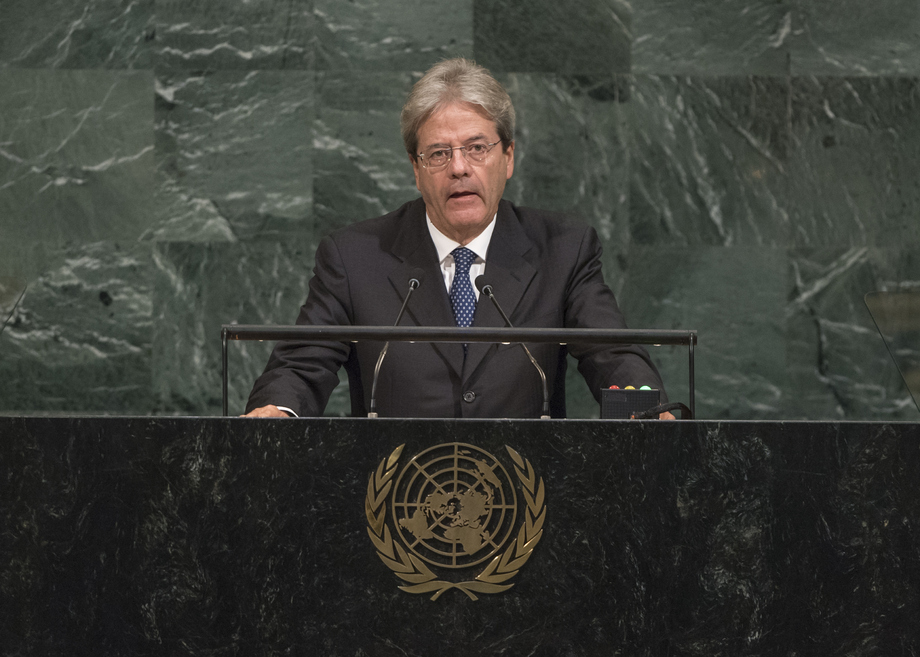 PAOLO GENTILONI SILVERI, Prime Minister of Italy, said globalization’s socioeconomic effects had triggered hardship and inequalities that in turn had resulted in major instability in the international geopolitical framework.  No country was immune from pressing concerns, including the Democratic People’s Republic of Korea’s provocations, terrorism and the desperation of migrants and refugees.  Indeed, the world must work together to overcome those challenges, building democratic, pluralistic and inclusive societies open to diversity, which would lead to peace and stability.

The European Union, he said, had tackled some of the greatest challenges since the post-war period and a new impetus had been inspired by multilateralism and the rule of law.  On migration, Italy’s belief in a compassionate response was reflected in its operations to rescue and receive migrants.  A global response was now needed to find long-term solutions.  For its part, Italy was taking a number of steps, including promoting partnerships with African countries, he said, adding that by investing in the continent, the root causes of migration could be addressed.  Going forward, efforts must be intensified to, among other things, protect vulnerable migrants and prevent and counter human trafficking.

Citing the fight against terrorism and violent extremism as another shared concern, he said more must be done to crush that scourge.  Highlighting Italy’s active role in the global coalition against Da’esh, he emphasized the need for a multidimensional force and international cooperation to end terrorism on the ground and online.  Because no country could tackle terrorism alone, such efforts must be based on cooperation between States and regional stakeholders.

Turning to a range of pressing concerns, he said Italy supported United Nations efforts in Libya, with a view to stabilizing the current situation there.  Regarding Syria, he said the only road to a lasting solution to the Syrian conflict could be a realistic and credible political process.  Highlighting Italy’s involvement in the Sahel region, he said the Group of Five for the Sahel (Sahel G-5) joint force was essential to fight terrorism and combat trafficking.  He also expressed concern for ongoing situations on the Horn of Africa, in Venezuela and on the Korean Peninsula.  With regard to the Iranian nuclear file, the international community should ensure that the plan of action remained a success story, he said, noting with satisfaction that the International Atomic Energy Agency (IAEA) had confirmed Iran’s continued fulfilment of commitments.

To address such diverse crises, he said, inclusive, sustainable development guided by the 2030 Agenda outlined a common pathway forward.  Italy was committed to strengthening cohesiveness, reducing inequalities and safeguarding the environment through supporting countries on that path.  The same strong commitment was needed to fight against climate change consequences, he continued.  When addressed together, he concluded, the crises and challenges of today could be overcome and those of the future could be prevented.