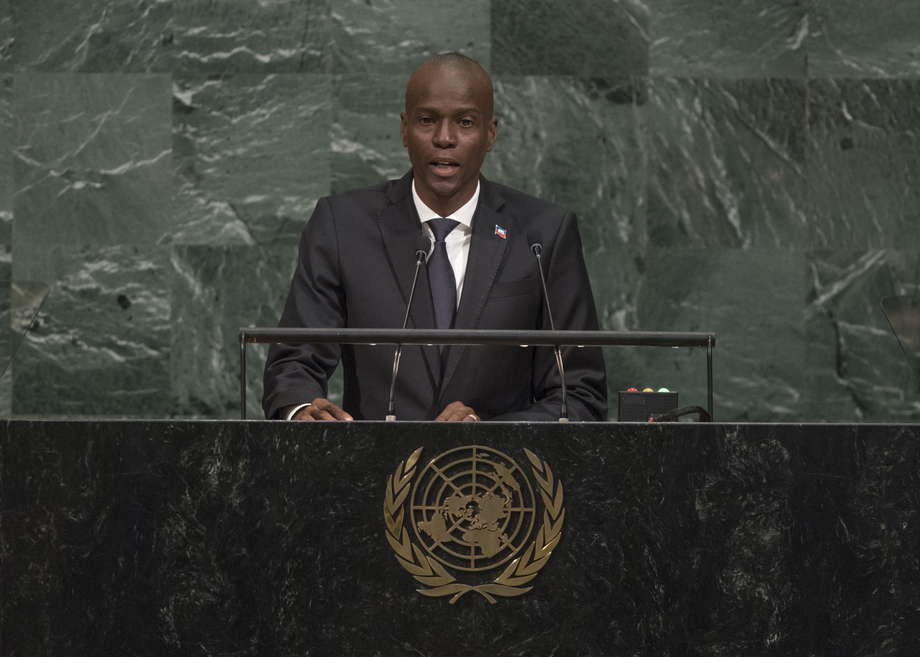 JOVENEL MOISE, President of Haiti, said the mission of the United Nations had never been so important, and thus, it was necessary to adapt the Organization to modern realities on the ground.  Expressing support for any initiative that could contain crises and seek the peaceful resolution of conflicts, he encouraged the United Nations to move along the path of conflict prevention.  Haiti had always spoken out against the proliferation of nuclear weapons, and he condemned States’ blatant desire to acquire and increase nuclear arsenals.  He also expressed concern about the ongoing crises in Syria and Venezuela, as well as the conflict between Israelis and Palestinians.

Haiti was deeply committed to the environmental facets of sustainable development, he said, and sought to build resilience against natural disasters that had consistently beleaguered its people and brother countries in the Caribbean.  His Government was committed to the Paris Agreement on climate change, and wished to see those countries most responsible for greenhouse gas production contribute the resources necessary for implementing that deal.  In the Caribbean, recent climatic events had drawn attention to the ways in which climate affected Haiti.  Such weather phenomena were due to the impact of humans on the environment, he stressed.  In January 2018, when Haiti assumed the presidency of the Caribbean Community (CARICOM), it would organize a regional conference aimed at establishing an inter-State commission that would devise a strategy for addressing climate issues, such as the availability of climate insurance.

More broadly, he said Haiti had taken steps to consolidate democracy and the rule of law, having made significant efforts to promote development and political stability.  Noting that corruption had “infected” and shrunk Haiti’s economy, and compromised its political situation, he said it was time that official development aid (ODA) and domestic resources upheld the interests of the Haitian nation.  Corruption had prevented basic resources from being allocated to citizens, depriving them of adequate energy distribution, quality education, drinking water and socioeconomic opportunities.  Haiti’s new leaders were waging an unwavering struggle against such behaviour.  Efforts were also under way to guarantee the independence of and increase the effectiveness of the judicial apparatus.

While the international community had spent more than a decade supporting security in Haiti, and had provided help when disaster struck, he said Haiti was using all levers available to grow the economy, despite its limited resources.  It was striving to create decent jobs for young people, and had made human resources management part of the State reform process.  His Government was determined to provide opportunities to the most vulnerable members of society, to ensure they were not tempted to leave the country, many times under life-threatening conditions.  Haiti could not allow institutions to be weakened or corruption to widen the distance between citizens and the State.  Haitians were acutely aware that they were responsible for their country’s development, he continued.

Addressing two phenomena stemming from the United Nations presence in Haiti — the odious sexual abuse and exploitation by peacekeepers and United Nations staff, and the cholera epidemic — he said the Organization was morally obliged to provide the recourses to ensure that cholera left the country.  Improving Haiti’s health system, including by eradicating cholera, was a priority for his Government.  Despite some progress, the number of cholera victims stood at 10,000 people and continued to grow.  Further, there were tens of thousands of cholera orphans.  The United Nations must live by and give tangible form to its noble ideals, he stressed, by shouldering all its responsibilities to remedy the situation, which had caused grave harm to the Haitian people.