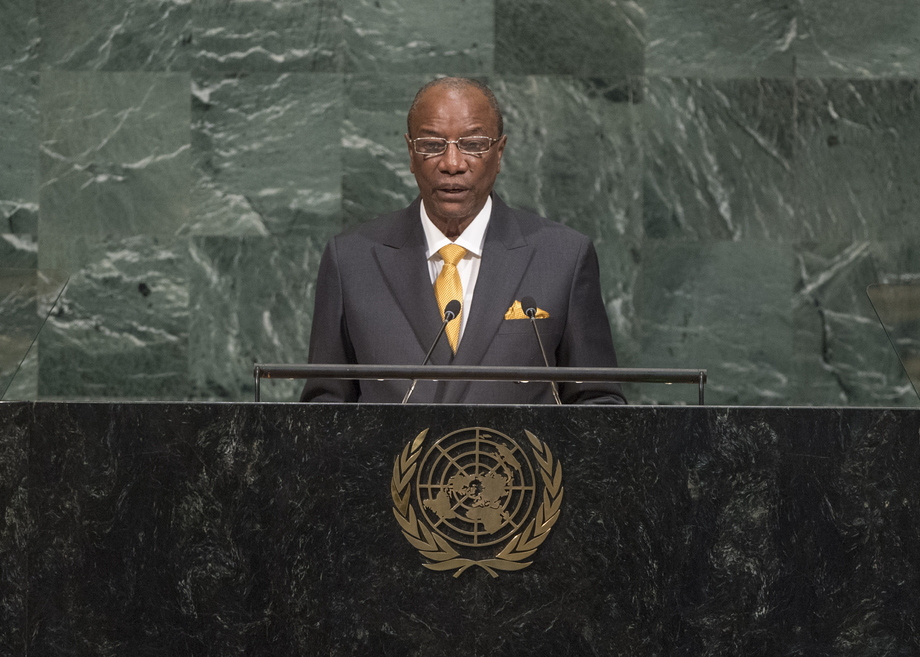 ALPHA CONDÉ, President of Guinea, said that Africa had awoken and was prepared to rise up to fight for sustainable development, justice and good governance.  Today more than ever, Africa was determined to take its destiny into its own hands and be the main stakeholder in its development, while also taking a leading role in managing international affairs.  It would not be an easy task, but Africa had the potential and assets to take its place as one of the greatest continents on the world stage.  The interdependence of the challenges facing humanity required a paradigm shift in perceptions and actions concerning Africa.  The continent’s priorities must be tackled with pragmatism, as destinies were no longer fragmented in the world.  The massive flow of refugees, large-scale migration and natural disasters were a sad illustration of that reality.  The new approach much put greater emphasis on human beings.  The adoption of the 2030 Agenda and Agenda 2063 on the regional level were a significant step forward in the fight against poverty, if all commitments were kept.

Africa had been the most dynamic continent over the last decade, and forecasts indicated that trend would continue, he said.  Economies must be diversified to make them more resilient through investments in areas like agriculture, infrastructure, information and communications technology (ICT), and energy.  Such a structural transformation would depend on access to energy, although economic integration would require the effective implementation of the Continental Free Trade Area.  The African Union had sought a lasting solution to the numerous challenges confronting young people to make that part of society the real driving force for development.  He urged the international community to support an African initiative that sought to recruit, train and deploy 2 million health-care workers across the continent.

Africa had decided to take responsibility for itself and speak with one voice to find lasting solutions to its problems, he continued.  The African Union could now speak with one voice on common problems, with a view towards reaffirming its economic autonomy, which would allow it to play a leading role on the international scene.  The Union was determined to eradicate hot spots on the continent by promoting dialogue and finding African solutions.  Africa must no longer be left on the side-lines of decisions affecting it.  Turning to United Nations reform, he stressed that the Security Council no longer reflected the realities of the world, particularly given the dearth of African representation on that body.  It was high time to fix that injustice, which had gone on too long.  In that context, he called for the enlargement of the Security Council, underscoring that if it was not possible to abolish the veto entirely, the new Council members must have the same prerogatives and privileges as the current members.

The African Union promoted a regional approach to conflicts, which meant that partnership between that entity and the United Nations must be aimed at building regional capacity, given their understanding of the root causes of conflicts, he said.  The African Union would spare no effort to fund 25 per cent of its peace support operations in Africa, as mandated by the Security Council.  The Union was focused on prevention, mediation, promoting dialogue and finding peaceful political solutions, which was less costly than peacekeeping operations, which had questionable effectiveness.

On terrorism, the African Union considered that only increased cooperation, particularly on the exchange of information and intelligence, would enable it to deal with the scourge and cut off financing sources, he said.  Additional efforts must be focused on the eradication of poverty, exclusion and radicalization.  The Union reiterated its unfailing support to the people of Palestine and to their right to independence.  It was also concerned by the situation on the Korean Peninsula.  The twenty-first century would undoubtedly provide an opportunity for renewal on the African continent, and in that regard, African young people and women were prepared to write a new history for humanity.