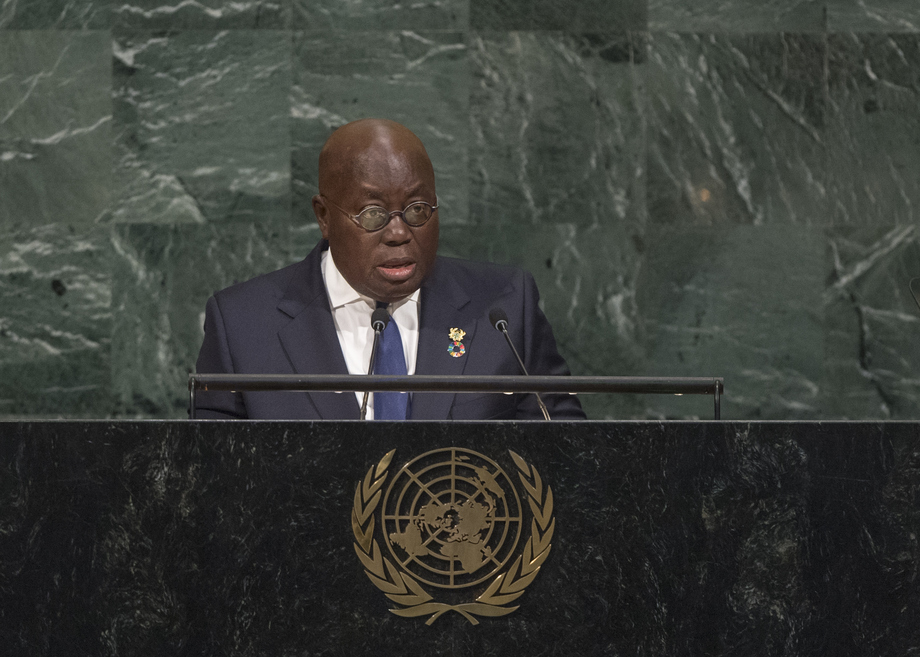 NANA ADDO DANKWA AKUFO-ADDO, President of Ghana, said Africa had come of age to hold its rightful place on the world stage.  The continent was ready to work to put in place a stable democratic system with the aim of achieving sustainable economic progress.

For its part, Ghana was determined to transform itself into a prosperous nation.  It had worked hard to achieve political stability and strengthen its institutions.  The country had also grown its economy with the aim of providing better job opportunities for its citizens.  To ensure that Ghanaians had the requisite skills, the Government had introduced a programme to offer free secondary education.  “This has already led to an increase of over 90,000 children, who had entered this academic year, who otherwise would have dropped out,” he said.

He said such efforts to transform Ghana’s political, social and economic systems would allow the country to depend on itself for growth, rather than relying on handouts from other countries.  While Ghana did not disclaim aid, the country also did not “want to be a scar on anybody’s conscience”, he said.

Building a country which did not depend solely on aid for growth would allow Ghana to establish sustainable relationships with other countries.  On that issue, he stressed the importance of ensuring a nuclear-free Africa, noting that highly enriched uranium had been flown out of Ghana back to China three weeks ago.

Turning to Africa, he said cooperation with regional and continental groups such as the Economic Community of West African States (ECOWAS) and the African Union was vital for achieving peace and security on the continent.  Conflicts plaguing countries including Libya, South Sudan and Mali would be more effectively resolved if the international community supported the efforts of Africa’s regional and continental organizations.  On the topic of United Nations reform, he stressed the need to modernize the Security Council to ensure that Africa was represented.  “We cannot insist on peace and justice around the world, when our global organization is not seen by the majority of its members as having a structure that is just and fair,” he asserted.