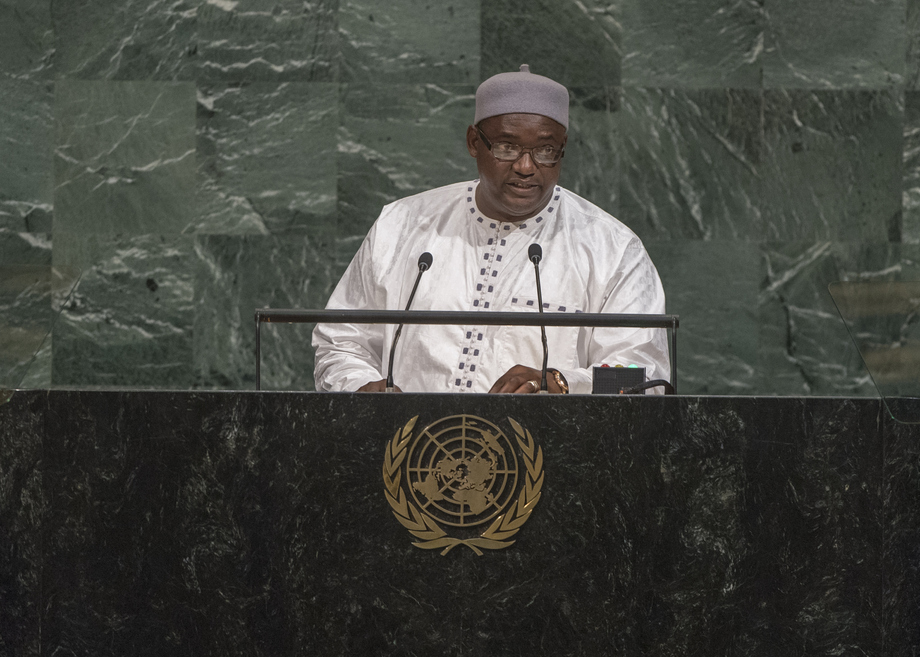 ADAMA BARROW, President of the Gambia, said his country was undergoing “a new democratic beginning” in a transition that had come about through a political crisis.  The Gambia had been able to overcome the crisis and recognize the importance of national unity, regional intervention and international support, he said, thanking ECOWAS for its timely intervention to restore peace.  The Gambia faced enormous challenges, ranging from the need for economic revitalization to the necessity of judicial reform, he said, emphasizing that only by overcoming those challenges could the country consolidate its democratic gains and deliver a new Gambia “fit for our children to be proud of”.  Reform plans would incorporate the Sustainable Development Goals and the Paris Agreement, he added.

He went on to describe climate change as critically relevant to the Gambia’s development.  With land productivity having declined due to climate change, Gambians had been forced to seek new sources of income abroad and many perished on the journey from the Gambia to Europe, he said.  That had disproportionately affected young people, who were at the core of the Gambia’s transition, and as such, youth employment would become a priority, he said.

As part of its transition, he said, the Gambia was taking clear steps to participate more fully in the international community and was in the process of rejoining the Commonwealth and the International Criminal Court.  Plans were also being finalized for a round table donors’ conference to mobilize resources for the Gambia’s long-term development.  Such efforts, especially in the areas of transitional justice and security-sector reform, would help to consolidate peace, justice and democracy in the country, he noted.

He urged the private sector to emulate the generosity of philanthropists towards the world’s most marginalized.  Regional cooperation would prove central to the “pursuit of peace and security in Africa”, with regional bodies like ECOWAS playing a key role.  Being good neighbours would help to combat the security threats gripping the region, he added.  Noting that his country remained deeply concerned over the lack of a solution to the Israeli-Palestinian conflict, he emphasized that the Gambia continued to promote a two-State solution, adding that, in Asia, it still fully recognized the People’s Republic of China as the sole representative of the Chinese people.

The President went on to express support for United Nations reform, stressing that it was necessary to ensure “trust and accountability” between Member States and the Secretariat.  Reform must also include the Security Council, he said, pointing out that Africa had not given up its legitimate and historic quest for true membership.  The Gambia supported the African Union’s demand for “long overdue” reform, he emphasized.