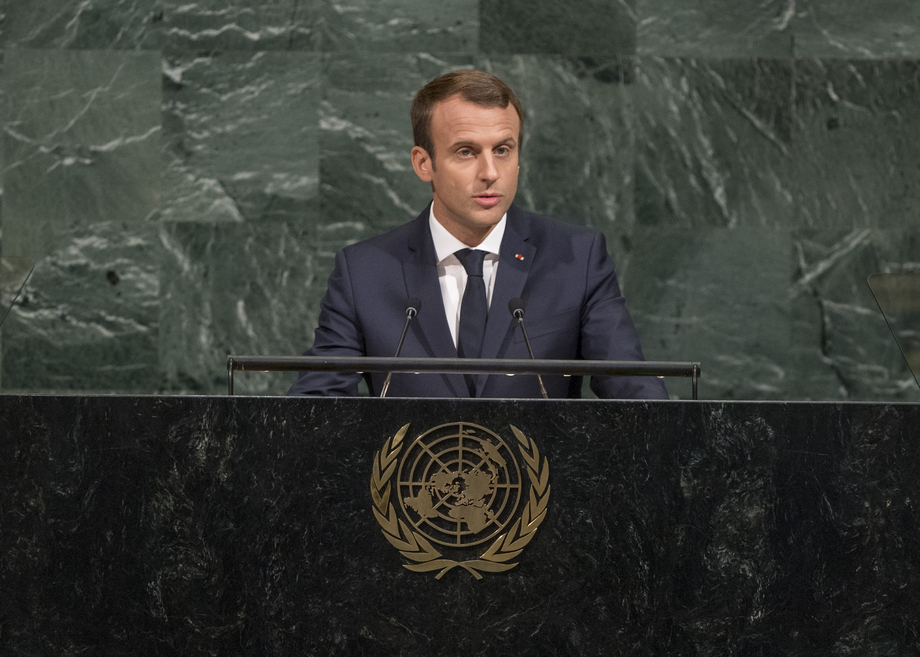 EMMANUEL MACRON, President of France, outlining his country’s duty to speak up for the voiceless, said the people of Syria had suffered enough.  The international community should acknowledge its collective failure and find methods to build a durable peace.  France was unwavering against the use of chemical weapons and he underscored the need to act against Islamic terrorism in Syria and Iraq.  As Jihadist terrorism had hit France and other nations, use of the Internet for terrorist purposes, including financing, should be challenged.

As forced migration had demonstrated, there were no barriers to the onward march of despair, he said, which should be changed towards the road to freedom.  Access to humanitarian aid should be provided and the rule of law re-established.  “As we all know, we are dealing with ethnic cleansing here,” he said, and humanitarian law was no longer being respected.  The protection of refugees was a moral and political duty, and France had pledged to support the Office of the United Nations High Commissioner for Refugees (UNHCR)in opening escape routes wherever required and by upholding the Geneva Convention.  The causes of instability must also be addressed, as migration and terrorism were political challenges first and foremost.  If they were to be overcome, it would only be through development.

He said France would work to ensure that aid arrived in countries where it was needed.  Its first priority was to invest in education, followed by health to combat pandemics and malnutrition.  He highlighted the key role of United Nations Educational, Scientific and Cultural Organization (UNESCO) in preserving progress and protecting freedom of expression.  In that context, he called for the creation of a Special Representative of the Secretary-General for the protection of journalists across the world.

On climate change, which was leading to increasing numbers of disasters, he said the planet was “taking its revenge for the folly of mankind”.  France had promised to achieve a universal agreement in Paris, which had been signed in the General Assembly.  That was “not up for renegotiation”, he said, as taking it apart would demolish the existing pact between States — and between generations.  While the agreement could be improved, the international community should not backtrack.  He fully respected the decision of the United States, noting that the door would always be open, and that France would continue to work with Governments, local governments, non-governmental organizations and others on combatting climate change.  On 12 December, his Government would meet in Paris with those who wished to drive forward.  It would also allocate €5 billion to climate action between now and 2020.

Turning to non-proliferation, he said the Democratic People’s Republic of Korea should be brought to the negotiation table for a political settlement, noting that France rejected escalation and would not close any door to a dialogue that would work towards peace.  He expressed support for the nuclear agreement with Iran, noting its renunciation would be a “grave error”.  Multilateralism was the only way forward with both the situation in Iran and in the Democratic People’s Republic of Korea.  France would stand shoulder to shoulder with the United Nations to carry out organizational reform, he said, calling on the Security Council to not use its veto when atrocities were carried out.  Forgotten voices had their place in the General Assembly.  To ignore them would mean that the challenges they faced would engulf us all.