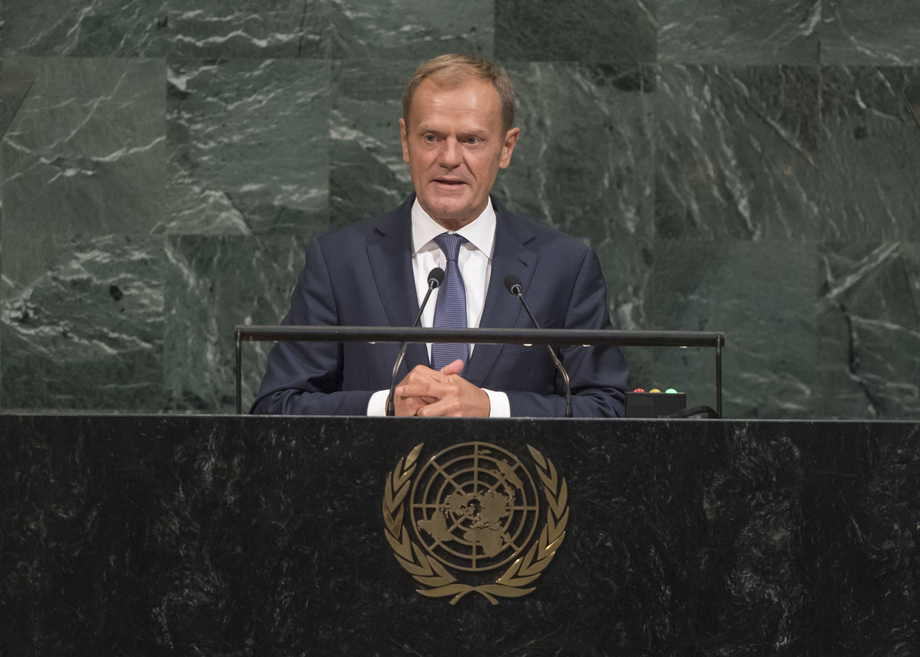 DONALD TUSK, President of the European Council of the European Union, said the United Nations was the best tool available to address today’s conflicts, famine, forced displacement, terrorism and the return of nuclear tensions.  It was imperative that the United Nations rose to those challenges and the bloc expected it to become a more energetic, less bureaucratic Organization that acted with clarity and purpose in all its actions.  The European Union considered the reform proposals as the bare minimum, he said, adding:  “What is needed is more ambition, not less.”

Indeed, the United Nations remained a vital forum for debate, even if it had declined in popular esteem in recent years, he said, pointing to the Security Council’s 11 September action to sanction the Democratic People’s Republic of Korea as a sign of its capacity for real leadership and unity.  Still, that action was inadequate, as no country should be allowed to undermine the global non-proliferation regime or threaten peaceful countries.  He called for peaceful denuclearization on the Korean Peninsula, encouraging all concerned to uphold the Joint Comprehensive Plan of Action with Iran as a multilateral deal that delivered more security for all.

Emphasizing that the European Union wanted to work in partnership with African countries on challenges ranging from security and counter-terrorism, to economic growth and job creation, he said the bloc was already cooperating with United Nations missions on peacekeeping and conflict prevention in Mali, the Central African Republic and other conflict zones, while doing its best to alleviate the humanitarian crisis affecting more than 20 million people in the Lake Chad Basin, South Sudan and Somalia.  Still, more must be done and now was the time to “wake up” to those escalating situations before it was too late.

To address the global refugee crisis, the European Union continued to receive people in need of protection and was supporting the United Nations process to develop the Global Compact on Refugees.  More engagement was needed in terms of funds for humanitarian assistance and resettlement options for the displaced.  At the same time, more efforts must be made to crack down on human smugglers.  Repeated terrorist attacks in Europe and beyond required greater efforts by the United Nations to address counter-radicalization.  He called on the major online companies to develop, as a priority, the means for automatic deletion of extremist content immediately after posting.

The Paris Agreement was the cornerstone of global efforts to tackle climate change, he said, which the European Union would implement swiftly and fully.  The bloc would also work with all partners, particularly vulnerable countries, on climate issues, and all those that shared the belief that the Agreement was necessary to protect the planet.  While the global economy and trade were expanding, security tensions were rising and global cooperation was being questioned.  Making international action robust, credible and transformative was a challenge, he said, stressing that the European Union would never give up working with and within the United Nations until that challenge was met.