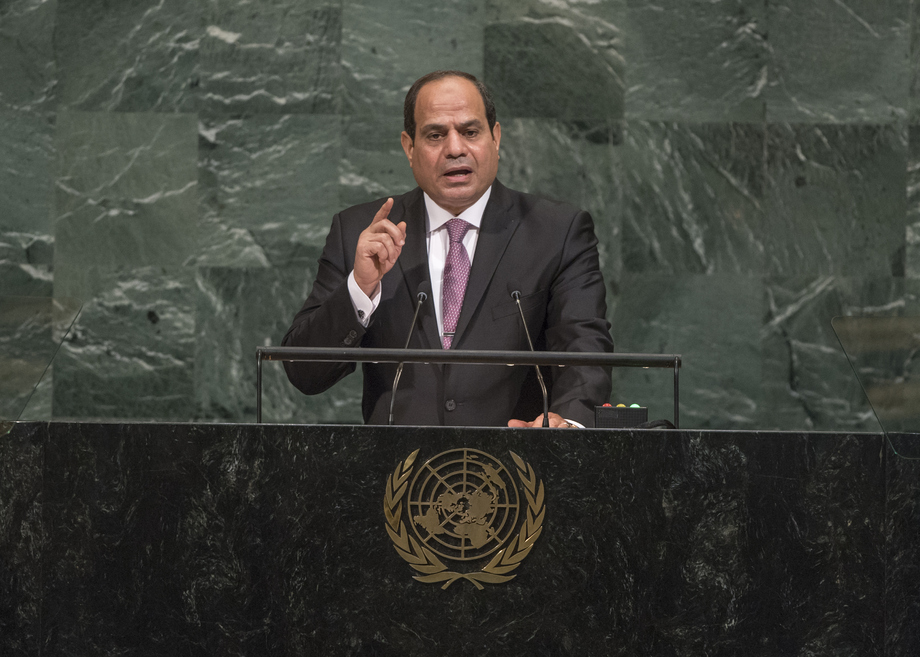 ABDEL FATTAH AL SISI, President of Egypt, said his country’s long-standing involvement with the United Nations — as a founding member having served six times on the Security Council and the seventh-largest contributor to peacekeeping operations — bore witness to its constant effort to build a world based on freedom, dignity, security and prosperity.  However, that world was far from reality, with the Arab region having become an epicentre of civil conflicts.  Egypt was navigating such unprecedented dangers while relying on an ambitious development strategy that included reform efforts targeting youth.

Egypt’s foreign policy rested on the principle that the only solution to crises afflicting the Arab region was upholding the notion of the modern nation-State based on citizenship, equality, rule of law and human rights.  Political solutions were the only way forward in several ongoing crises, he said, adding that a consensual political solution in Syria would succeed through United Nations-led negotiations.  Likewise, only a political solution could settle the crisis in Libya, he said, emphasizing that Egypt would not allow the continuation of attempts to tamper with the unity and integrity of the Libyan State.  Similarly, political settlements must overcome the crises in Iraq and Yemen.

He went on to underline that the question of Palestine must be addressed promptly, as the time had come for a comprehensive and final settlement of the longest outstanding crisis in the Arab region.  “The closure of this chapter through a just settlement is a necessary precondition for the entire region to transit into a new phase of stability and development,” he said, adding that peace would eliminate one of the main pretexts used by terrorists.  “It is time to permanently overcome the barrier of hatred forever,” he declared.  A comprehensive approach was needed throughout the region to eradicate terrorism and eliminate its root causes, he said.  Emphasizing that double standards should not be supported, he said “we in the Muslim world need to face our reality and work together to rectify misconstrued notions which have become an ideological pretext for terrorism.”

Equally important was eliminating the root causes of international crises and sources of threats to global stability, he said.  Common but differentiated responsibilities must guide international efforts to narrow the economic and social gaps between developed and developing countries.  Such approaches could include involving developing nations in global economic governance structures and facilitating their access to financing, markets and technology transfers.

With the General Assembly session presenting an opportunity for self-reflection, he said, it was time to admit the deficiencies hindering the international system from delivering on the noble objectives it had been created to realize and to renew commitments to establish a more equitable global order, since attaining justice remained a necessary condition for confronting today’s immense challenges.  The tragedy facing Myanmar’s Rohingya community was yet another reason why the international community must meet its moral obligations and legal responsibilities, as outlined in the United Nations Charter, he emphasized.  “Let us be true to ourselves and dispel the mentality of polarizing policies,” he said.  “It is incumbent upon all States to strive to further relations with all partners, with malice to none.”

The representative of Egypt, speaking in exercise of the right of reply, said his country and others had decided to take legal action to prevent Qatar from interfering in the affairs of regional States.  The Qatari regime was financing terrorism, most recently in Iraq, where they had payed ransom to terrorists.  Qatar was providing terrorists with a safe haven.  It refused to prosecute them and continued to instigate terrorist attacks.  That had been going on for years.  “The insistence of the regime to support terrorism was something that we all reject,” he said.  The countries that had decided to take action against Qatar did so in accordance with international law.  He reminded the Qatari regime that fighting terrorism was an obligation under international law.