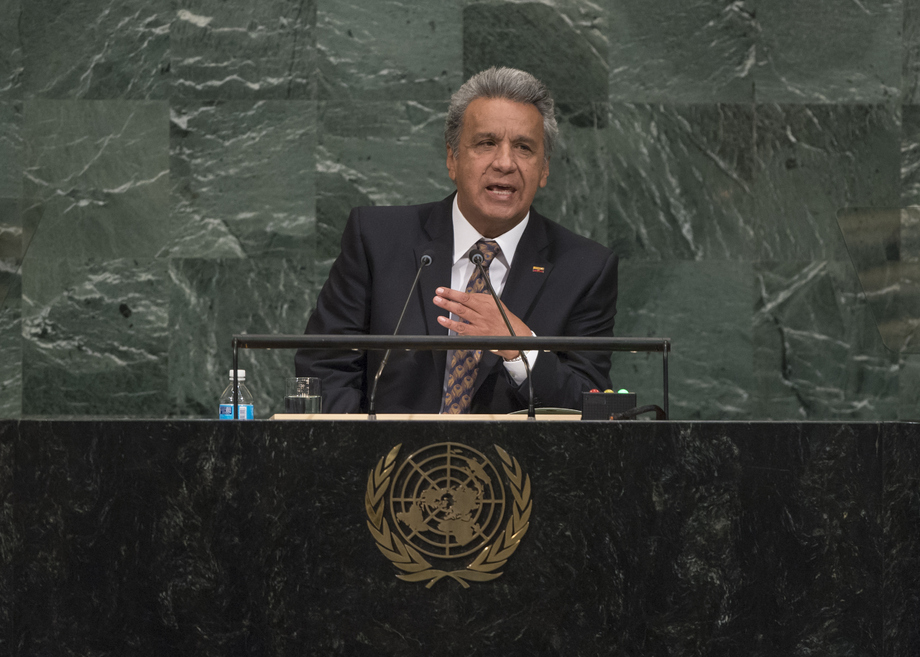 LENIN MORENO GARCÉS, President of Ecuador, said much remained to be done for the 1 billion people in the world living with disabilities.  Describing himself as an optimist, he said political will was required in that regard.  Without a doubt, a responsible Government must care for, inspire, support and give thanks to its citizens.  Emphasizing the importance of caring for people throughout their life cycle, and of eradicating all forms of violence, he said the mistreatment, abuse and killing of women and girls must not be allowed.

The world was going through a difficult time characterized by many crises, including a potential nuclear confrontation, he said, stressing that a commitment must be made to building peace.  It was difficult to understand why arms traffickers were prosecuted but arms producers were not.  Resources that could be spent on sustainable development were being wasted on war instead.  Referring to the blockade on Cuba, he underlined the importance of respecting the sovereignty of States and the principle of non-intervention.  Ecuador resolutely supported the peace talks in Colombia and welcomed the recent Quito temporary ceasefire agreement between that country’s Government and the National Liberation Army group, he said.

Alarming inequality in the world was another challenge, he said, calling for measures to combat tax avoidance and evasion.  A culture of transparency must be fostered, he added, noting that no public official in Ecuador could keep assets in tax shelters.  As President of the “Group of 77” developing countries and China, Ecuador was pushing for fair tax action, including the creation of an intergovernmental body on tax cooperation within the United Nations.

Expressing solidarity with those affected by the devastation caused by climatic phenomena, he said it was a common responsibility to combat climate change.  “We have common but differentiated responsibilities,” he noted, emphasizing that those who polluted most must assume greater responsibility.  Underlining his country’s initiative to halt deforestation in the Amazon region, he said more must be made of indigenous knowledge.

Turning to the migration crisis, he said Ecuador supported free mobility and universal citizenship, stressing that free movement could not be limited to goods and capital and that closing borders was never a solution.  He recalled that when forming his Government, he had called for a national dialogue to build democracy and create space for a new generation of leaders.  A new society based on the common good could and must be promoted, he emphasized, adding that a fair international system and a commitment to eradicating poverty and inequality would lead to a world in which everyone lived in dignity.