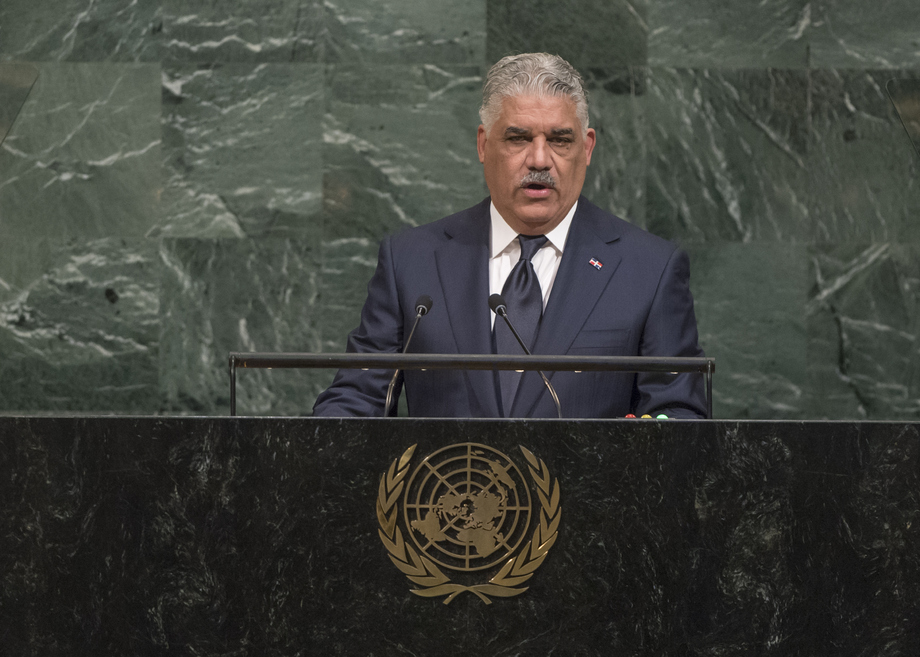 MIGUEL VARGAS, Minister for Foreign Affairs of the Dominican Republic, apologized for the absence of President Danilo Medina, who had been compelled to return home to deal with the threat of Hurricane Maria.  Expressing deep solidary with the victims of Hurricanes Harvey, Irma and Maria, he noted that accurate figures for the damages to many Caribbean islands had not yet been determined.  However, it was clear that the damage was substantial, and that recovery would take years, he said.  Valuable lives had been lost.

He went on to say that the material losses resulting from Hurricane Irma had far exceeded his country’s GDP.  “Our economies, our way of life and our development potential are in danger,” he emphasized, calling upon other nations to join forces in helping the Caribbean region confront the threat.  “It is not enough to send messages of solidarity or humanitarian aid,” he stressed.  “And it is absolutely not enough to sign agreements on climate change.”  Those agreements must be coherent, move a joint agenda forward, and develop concrete action plans, he said, proposing the creation of a special fund to deal with natural catastrophes while fostering awareness, prevention and resilience strategies.

Spotlighting the United States as an example to illustrate how economic resources could help to alleviate the damage caused by natural phenomenon, he recalled that in the aftermath of recent hurricanes, that country’s Government had dispersed much-needed assistance to its citizens.  However, there was no way that vulnerable and insular regions such as the Caribbean could cope on their own, he said.  “We cannot afford to keep downplaying this reality.”  Appealing on behalf of the children, women, men and elderly people facing “absolute helplessness”, he urged the United Nations to find ways to help Governments unable to rebuild on their own.