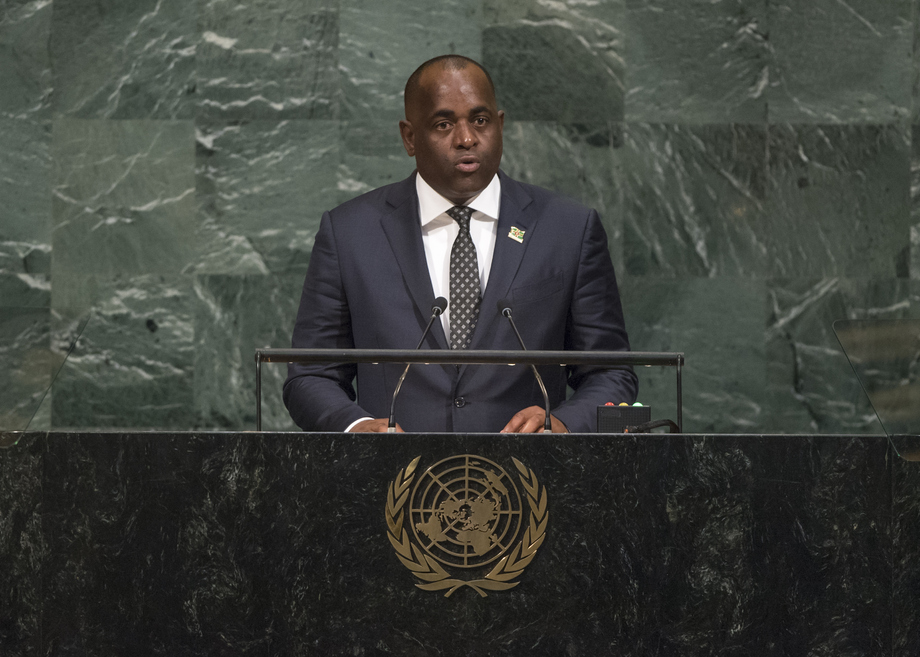 ROOSEVELT SKERRIT, Prime Minister and Minister for Finance and Public Service of Dominica, said that he had come to the Assembly from the front lines of climate change.  In the past, his country would prepare for one serious storm a year, and that before the current century, no one generation had seen more than one Category 5 hurricane in their lifetime.  Yet now, two such storms had formed in the Atlantic in only a few weeks.  Neither Dominica, nor the region, had started this “war against nature”, he said, declaring: “This war has come to us.”  There was little time for action.  While big countries talked, small island nations suffered.

The Caribbean did not produce greenhouse gases or sulphate aerosols, he said, nor did it pollute or overfish the oceans.  The region did not contribute to global warming, yet it was among the main victims.  The reality was pure devastation, as Dominicans bore the brunt of climate change.  “We dug graves today in Dominica.  We buried loved ones yesterday.  And I am sure that as I return home tomorrow, we shall discover additional fatalities,” he said.  Dominica had come to the Assembly to declare an international humanitarian emergency.  The time had come for the international community to take a stand and decide whether it would stand shoulder-to-shoulder with those suffering the ravages of climate change.  The call for urgent action was increasing and all countries — big and small, developed and developing — must come together to save the planet.

He recalled that the Green Climate Fund had been created to help put in place mitigation measures, but much more must be done to help countries bearing the brunt of climate change.  The World Bank had established the Caribbean Catastrophe Risk Insurance Facility to assist countries impacted by natural disasters, and while helpful, the funds were usually grossly inadequate to rebuild infrastructure or maintain economic and social development gains that had been made following past storms.  Substantially more funds must be made available to vulnerable countries, he stressed, calling on the World Bank facility to recapitalize for greater coverage by using funds already committed from the Green Climate Fund.