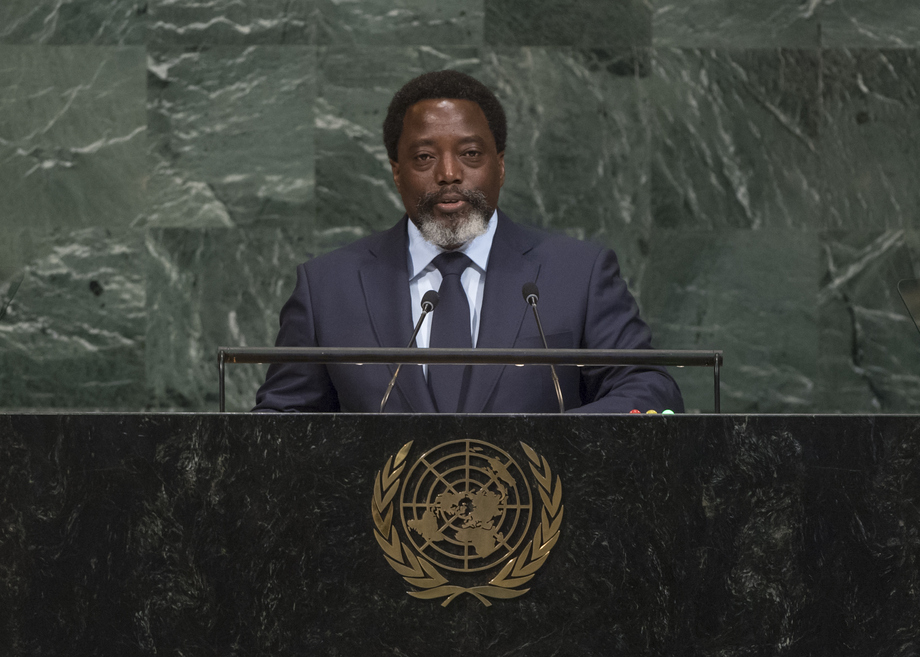 JOSEPH KABILA KABANGE, President of the Democratic Republic of the Congo, said that, for the past year, his country had fallen victim to terrorist attacks aimed at destroying peace and reversing the process of finding consensual solutions on the national level, while also undermining development efforts.  In the Kasï, a militia was using civilians, including children, as human shields and had carried out attacks against public buildings representing State authority.  He deeply lamented the barbarity that had led to the killing of two United Nations experts in March.  He was determined to ensure that light was shed on the exact circumstances of their deaths and that such horrendous acts did not go unpunished.  An open, public court process had been taking place over the last several weeks, he said, following the arrest of those suspected of that crime.

Reconciliation must involve justice, he said, as there could be no true lasting peace without it.  His country remained open to all forms of collaboration that involved dialogue.  Restorative justice had reversed dangerous trends regarding the security situation in the centre of the country, while in the east, national defence and security forces had advanced with laudable efforts, which had allowed for the containment of terrorist attacks.  Subregional cooperation between South Sudan and the Central African Republic would allow for the push back of the Lord’s Resistance Army (LRA) terrorist threat.  On combatting sexual exploitation and abuse, he welcomed the remarkable progress made by the country’s court, which had condemned and sentenced many perpetrators of such crimes.  No one had been spared from justice, irrespective of their military rank, he stressed.

Two years after the adoption of the 2030 Agenda for Sustainable Development, it was not too early to begin monitoring its implementation, he said, noting that the Democratic Republic of the Congo had started prioritizing, fleshing out and implementing its national development plan.  In support of the global action plan for education, the Government had expanded access and improved the quality of teaching and learning, as well as governance in the education sector.  As climate change threatened the fundamental rights of mankind, his country — and every other country in the Congo Basin — had worked to improve life on the planet.

Political stability was a national priority, he said, noting that, for nearly a year, the country had engaged in a dialogue process.  He commended all political forces that had signed the 31 December 2016 agreement, aimed at holding elections, stressing that for more than a year, efforts had been made to populate the electoral list, with 42 million people — of a projected 45 million voters — already registered.  While he expected the electoral calendar and timelines to be published soon, great challenges in organizing the elections remained, both on the logistical level, and the financial, security and legislative levels.  Nevertheless, the country was moving towards credible, transparent and peaceful elections, an irreversible process that should take place without external dictates and interference.

He said strategic dialogue on the future of the United Nations Organization Stabilization Mission in the Democratic Republic of the Congo (MONUSCO) was taking place with a view towards determining the speed with which those forces should be reduced until the Mission’s full withdrawal.  It was clear that MONUSCO could not seek to stay in his country indefinitely, or exercise its mandate in the same format without drawing lessons from weakness that had been identified.  He called for a re-dimensioning of MONUSCO’s mandate and its reorientation towards the country’s development needs, stressing the importance of respecting the Democratic Republic of the Congo’s sovereignty.