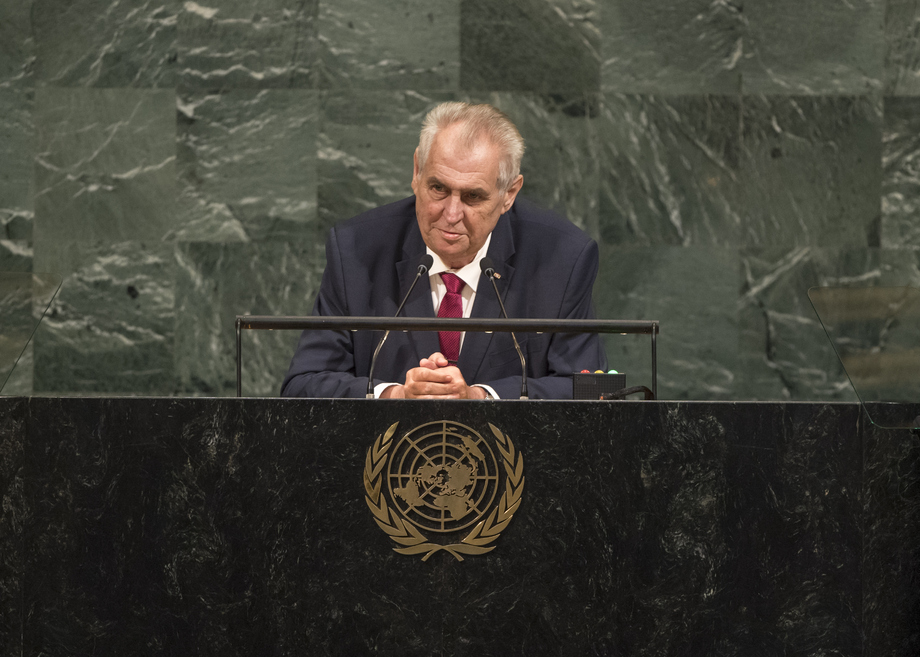 MILOŠ ZEMAN, President of the Czech Republic, described a new type of civilization, an anti-civilization, which had emerged over the last two to three decades.  Its typical feature was that it was based on terror — and nothing more.  Europe and the world were facing terrorist actions and “we all express solidarity with the victims and organize protests, but, unfortunately, we still hesitate to fight terrorist organizations with full power,” he said.

He recalled that, one year ago, he had criticized the United Nations for not being able to define the word terrorism in 70 years of existence.  On the other hand, he welcomed the Secretary-General’s new Office for Counter-Terrorism as a reasonable and practical solution.  There were currently 38 anti-terrorist organizations and institutions under the United Nations umbrella, and as that number increased, the more terrorist organizations flourished.

Calling for the use of military force against terrorism according to Article 47 of the Charter of the United Nations, he welcomed the appointment of the Under-Secretary-General of the Counter-Terrorism Office who would be able to solve problems in the fight against Islamic terrorism.

On the other side of the coin was the issue of migration, he said, which was often provoked by terrorist actions, as had been the case in Syria and Iraq.  Migration was connected to terrorism in that terrorists often hid within migrant populations.  While migrants must be welcomed, massive migration from African and other countries underscored the issue of “brain drain” — the weakening of potential in those countries.  By welcoming migrants in Europe, countries were fuelling the phenomenon of brain drain, and in turn, reversing progress in countries of origin.

In conclusion, he said the war on terrorism should be based on historical optimism and a belief that it would be overcome.  In Barcelona, for example, the Spanish people had said they were not afraid, while former United States President Franklin Roosevelt had proclaimed freedom from fear.  The most beautiful expression of historical optimism, however, was in the words of theologian Martin Luther whom he quoted as having said:  “If I knew that it would be doomsday tomorrow, I shall go today and plant an apple tree.”