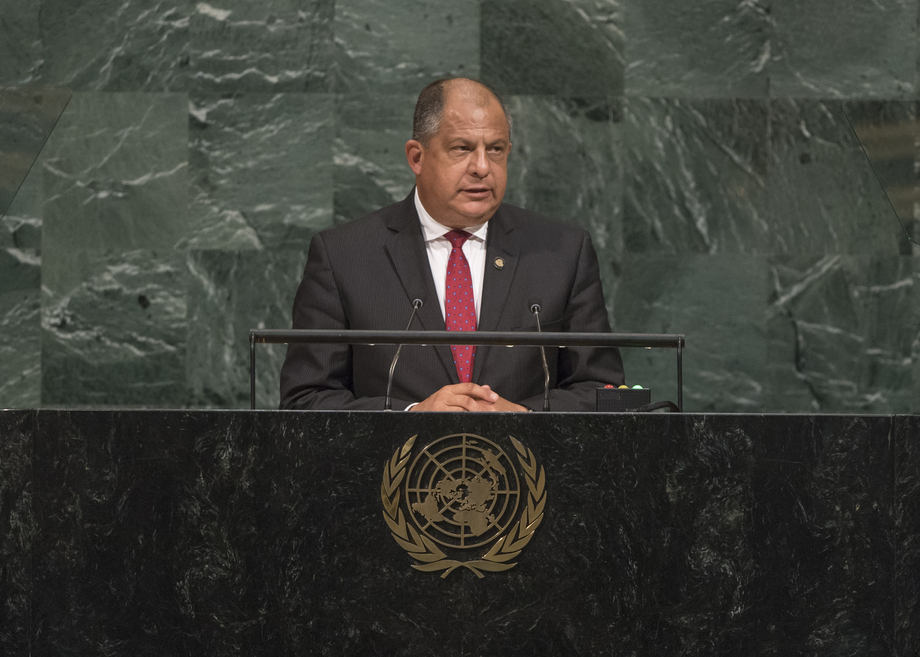 LUIS GUILLERMO SOLÍS RIVERA, President of Costa Rica, recalled that his country in September 2016 became the first one to establish a national agreement to meet the Sustainable Development Goals, and that it reduced poverty for the first time in the last seven years.  “Leaving no one behind” was a State and government responsibility, but the entities should act along with all sectors in society, he said.  He emphasized the importance of rethinking the concept of per capita income to determine a country’s development and called on the Secretary‑General to promote spaces that would implement working strategies to strengthen the capabilities of developing countries and allow more efficiency when cooperating with middle-income and least developed nations.

On development, he stressed the need to pay special attention to productive sectors like family farming, which represented the main source of income for 70 per cent of the poor population worldwide.  He mentioned that Costa Rica, along with other countries, would present during the session a resolution on “the decade of family farming 2019‑2028”.

Calling on women’s empowerment, he expressed support for the International Gender Champions proposal which aimed at reversing gender inequality within the United Nations.  Speaking about women’s domestic work and unpaid care, he stressed that the unpaid work of women is equivalent to 13 per cent of the world’s gross domestic product (GDP) and pointed to the gender pay gap, with the salary of a woman being 25 per cent lower than that of a man for the same post.  Highlighting the need to address the barriers to women’s economic empowerment, he said Costa Rica had a public policy that guaranteed employability on an equal basis.

Stressing that the fight against climate change required ambitious positions, he said the leadership of Chile and Costa Rica had caused Latin America to move towards establishing a regional instrument on the rights of access to participation and justice on environmental matters.  He reaffirmed his country’s determination to direct its economy towards carbon neutrality as part of the pre-2020 voluntary action and decarbonize the economy.