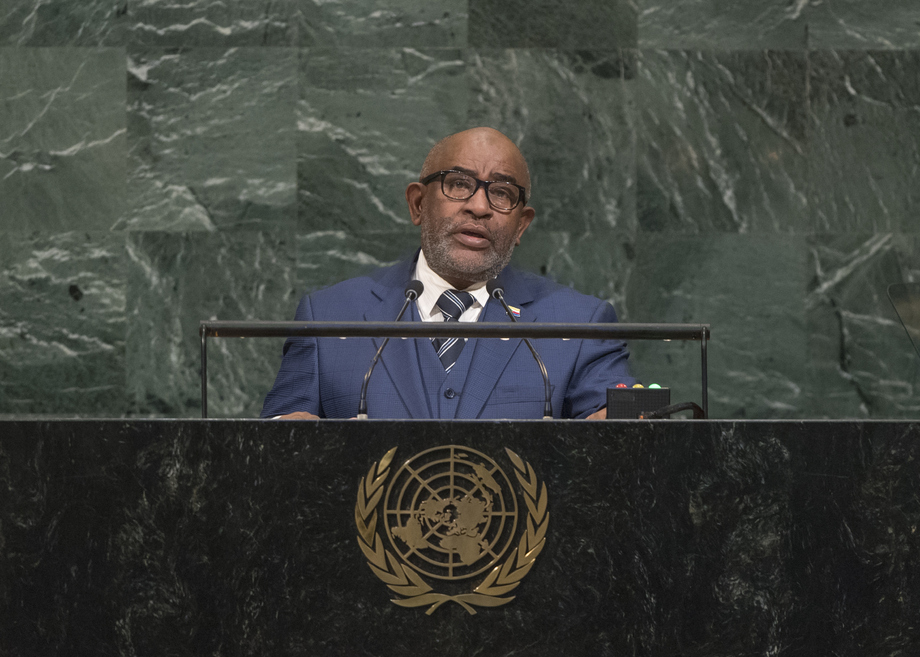 AZALI ASSOUMANI, President of Comoros, extended his condolences to the countries recently affected by natural hazards, urging those catastrophic events be a call to action to mitigating climate change.  Comoros was back on a path to stability, he said, reiterating his country’s commitment to achieving the Sustainable Development Goals and global peace and stability.  He stressed that development and climate change were closely linked.  Recognizing the gravity of the many crises around the world, he voiced his State’s commitment to working towards collective prosperity.  Migration, diplomacy, conflict prevention and United Nations reform posed great challenges for all continents, especially Africa, he said.

Migration was a grave concern for his country, as migratory patterns had great effects on origin and host countries, he continued.  However, the people from Comoros making the perilous journey to Mayotte were not migrants, and he called for a fair and balanced solution to the dispute and expressed hope that one would be reached by 2018.

Referring to terrorism as the “absolute repudiation of humankind”, he called for the fight against that scourge to be conducted with “all our strength”.  There was no intrinsic link between Islam and terrorism.  Terrorist “barbarians” belonged to no faith.  Islam advocated love and tolerance and promoted respect for human dignity, he noted.

He condemned “atrocious” attacks against minority groups in Bosnia and Herzegovina and Myanmar.  He hoped the United Nations would uphold the most basic rights of the oppressed, and called upon the international community to act and punish perpetrators before losing its credibility.  He called for an end to hostilities in the Middle East and repudiated the use of chemical weapons.  He expressed support for the right to self-determination of the Palestinian people and voiced his support for a two-State solution to the Israel-Palestine dispute.
He said that collective action was needed to promote the Sustainable Development Goals and to achieve a decent existence for all.  Improving health and education should be a priority, and technology presented great potential to build a better future.  His country was diligently working to achieve Goal 7, with a focus on renewable energy to bring reliable electricity to all.  To that end, he called for greater solidarity from the industrial sector.