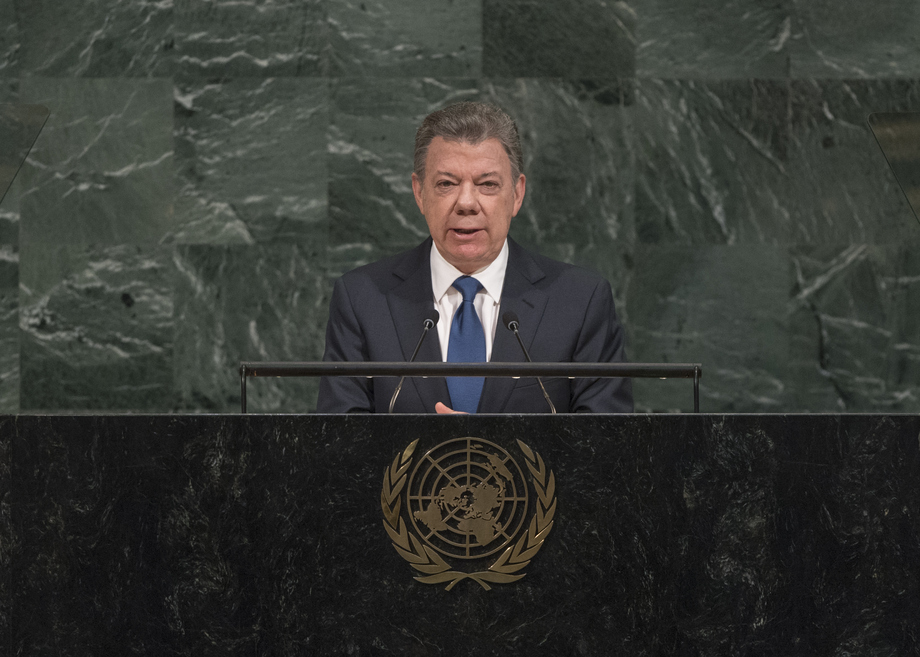 JUAN MANUEL SANTOS CALDERÓN, President of Colombia, said his address before the General Assembly today was his eighth and final one as a President.  He recalled several developments that had taken place since his first address in 2010, noting that Colombia had undergone a positive change and that the world had seen both improvements and setbacks.  “We were all witnesses, victims or protagonists,” he said.  Indeed, Colombian armed forces had defeated the military chief of the Revolutionary Armed Forces of Colombia (FARC).  The peace process with FARC had not only culminated with an agreement but with something more important:  the saving of thousands of lives.  The news he brought from Colombia was not of death, but indeed, of life.

That Colombia had ended a conflict that had killed thousands and left millions displaced should offer hope for other conflicts around the world, he said.  Ending war, and overcoming hate and fear, required a complex process of dialogue and concessions.  Colombia had succeeded thanks to political will and an awareness that peace was a necessary condition for both progress and happiness.  Paying tribute to the United Nations, he said a special mission had been established by the Security Council to verify and monitor the disarmament of FARC, as well as the ceasefire between the guerrillas and the Government.  More than 900,000 weapons had been destroyed and members of the former guerrilla groups had created a political movement to defend their ideas in a democratic manner.  “This is what a peace process is all about,” he exclaimed, “replacing bullets for votes and ending the use of weapons as a means for political pressure”.

In the coming days, another mission recently authorized by the Security Council would be established to reintegrate guerrillas into civil life, he said, and ensure security to both the former combatants and communities that had suffered from armed conflict.  From 1 October, the United Nations would help ensure compliance with the ceasefire and temporary cessation of hostilities achieved with the National Liberation Army, with whom Colombia was negotiating to restore complete peace.

He said building peace was a lengthy process entailing political, economic and social dimensions for which innovative programs in education, health and infrastructure were needed to close the deep social gaps in Colombia.  The Economic Commission for Latin America and the Caribbean (ECLAC) highlighted the progress Colombia had achieved in reducing poverty, and in seven years, more than 5 million Colombians had been taken out of economic hardship.  However, the air of hope in Colombia had not made them blind to the difficult situations for peace and democracy in other parts of the world.  He condemned the launch of nuclear missiles and tests by the Democratic People's Republic of Korea that constituted a global threat to peace and security, also expressing concern for Venezuela and the gradual dismantling of its democracy.  He called upon the Secretary‑General and the international community to support the Venezuelan people.

Turning to terrorism, he said it should be tackled with every means possible — military, political, intelligence and international cooperation — while its roots of fear, exclusion and hate must be replaced with love, compassion and respect for difference.  More broadly, the war on drugs had not yet been won and new strategies were needed, he said, pressing States to include human rights in their policies against drugs.  Colombia’s vulnerability to climate change had paved the way for achieving the Sustainable Development Goals.  With that, he offered with humility and gratitude the model of peace that Colombia had built and was happy to share with the world as an example of the strength of love, life and unity.