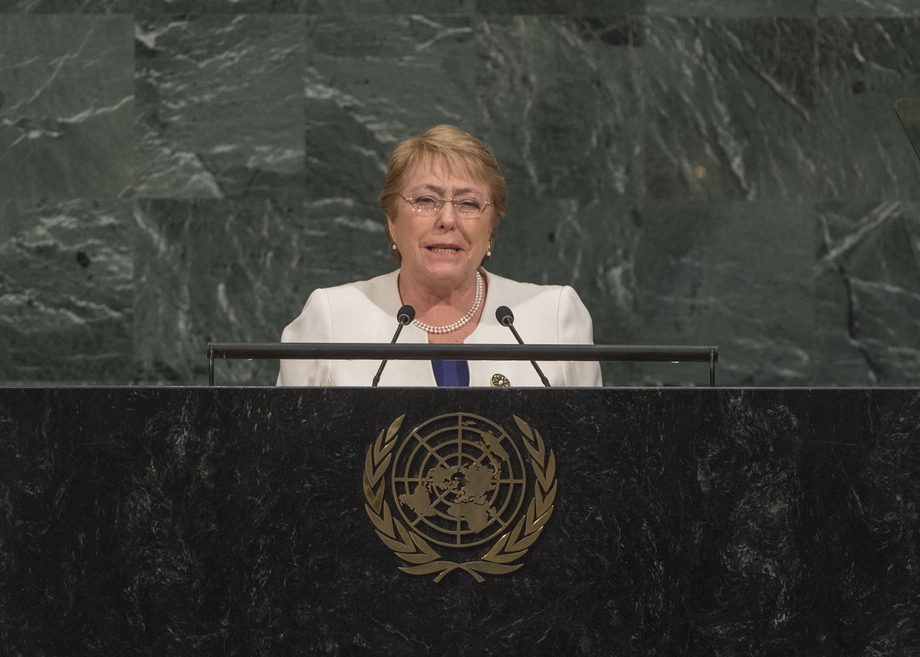 MICHELLE BACHELET JERIA, President of Chile, expressed her condolences to the families of the victims of the earthquake in Mexico and the hurricanes impacting the Caribbean.  “We are in a key turning point in humanity’s history,” she said, adding that it was time to take responsibility for climate change and “dare to change our productive models”.  Chile was a country which had known pain but also hope.  Chile was a full part of the world and its local challenges were similar to what people faced worldwide.  It was possible to reverse past decisions and overcome inertia.

The biggest strength of the 2030 Agenda was that all the people of the world must implement it together, she continued, adding that “there is no space for denial” on climate change.  Chile had established a green tax on carbon emissions in its energy sector and had moved from 6.3 to 17 per cent renewable energy.  It was also active in pushing forth ocean initiatives.  Some 8 million tons of plastic reached the sea each year, enormously impacting the world’s oceans.  Prohibiting the use of plastic bags in coastal cities was critical to protecting the ocean.  Outlining various initiatives Chile had undertaken to protect its biodiversity, she said that sustainable development was not “an impossible dream to finance”.

Describing some challenges currently facing her country, both in the political and business world, she underscored efforts which were particularly focused on making both sectors more inclusive, including through the establishment of a quota to include women in government.  Chile had made decisive progress in extending human rights to vulnerable groups, including by decriminalizing abortion in some cases.  It also continued to reform the education system.  “The idea is that there is no progress at the individual level without progress at the collective level,” she noted.

On Venezuela, she called for concrete results regarding the full restoration of democracy.  She also expressed concern for the conflicts in the Middle East and some parts in Africa, and the increasing tension on the Korean Peninsula.  It was essential to resolve all those challenges through diplomacy, she stressed, adding that “it is possible to completely eliminate nuclear weapons.”

She underscored the “enormous opportunity” in global trade and reaffirmed Chile’s commitment to multilateralism.  As did many middle income countries, Chile faced challenges, particularly as progress continued to be measured and graded solely by per capita income.  “Where are the multidimensional criteria of the 2030 Agenda?” she asked, stressing that countries vulnerable to natural disasters required special criteria.  She also reiterated the need to reform the Security Council.