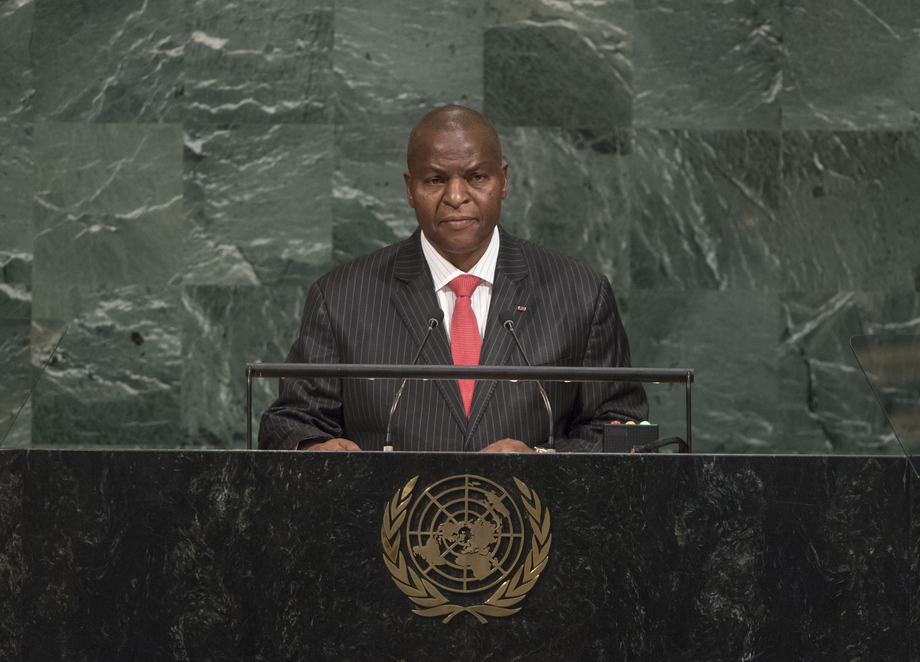 FAUSTIN ARCHANGE TOUADERA, President of the Central African Republic, outlining global challenges, called for redoubled efforts to end terrorism.  Northern Africa had been shaken by the many victims of migration who had been abandoned in the desert or lost their lives at sea.  The planet suffered the impacts of earthquakes, floods, drought, desertification and global warming, he said, stressing that commitments made under the Paris Agreement on climate change must be honoured.  On reform of the United Nations, there was a need to widen the Security Council in favour of Africa.  Human rights, rule of law and good governance were basic preconditions necessary for overall well-being.

On peace and security, he said the Government had mobilized all its energy to consolidate the process leading to a cessation of hostilities throughout the country, a laborious effort.  Noting that 14 armed groups were now participating in the disarmament, demobilization and reintegration efforts, he said all such groups had an opportunity to recommit to the country’s common values and constitutional principles.  He deplored that some armed groups had failed to immediately cease hostility, and welcomed the commitment of both neighbouring countries and regional organizations in the search for peace.

The work of the disarmament, demobilization and reintegration monitoring advisory committee was already under way, he said, adding that the Central African Republic was working to rebuild its national army.  On the human rights front, the country was improving training for prison wardens, as well as strengthening judicial and penitentiary infrastructure.  He also cited the agreement signed with the International Monetary Fund (IMF) in June, aimed at improving how the country manged its public finances.  The Central African Republic had streamlined its tax apparatus and sought to ensure a transparent budget process.

Indeed, the Central African Republic was moving along the path of good financial governance, he said, recalling nonetheless that the long crisis had had a disastrous effect on production and had increased poverty.  Rebuilding the Central African Republic would remain elusive if production continued to be random and beyond Government control, especially its vast natural resources, which must be brought entirely under its command.  The humanitarian situation had worsened in many parts of the country, with more than 2.4 million people requiring emergency aid and 600,000 internally displaced persons that needed help in returning home.  Another 500,000 people were refugees in neighbouring countries, awaiting return.

He outlined his hope that steps would be taken in 2017 to establish dialogue with the armed groups, noting that other major efforts would focus on implementing the disarmament, demobilization and reintegration programme.  He would also seek greater dialogue with regional actors in hopes they would provide political support for the road map for peace and national reconciliation.  The staffing of the United Nations Multidimensional Integrated Stabilization Mission in the Central African Republic (MINUSCA) was not sufficient to protect all civilians, he said, requesting that provisions be made in that regard, and that its mandate be strengthened to help the country regain control over its natural resources.