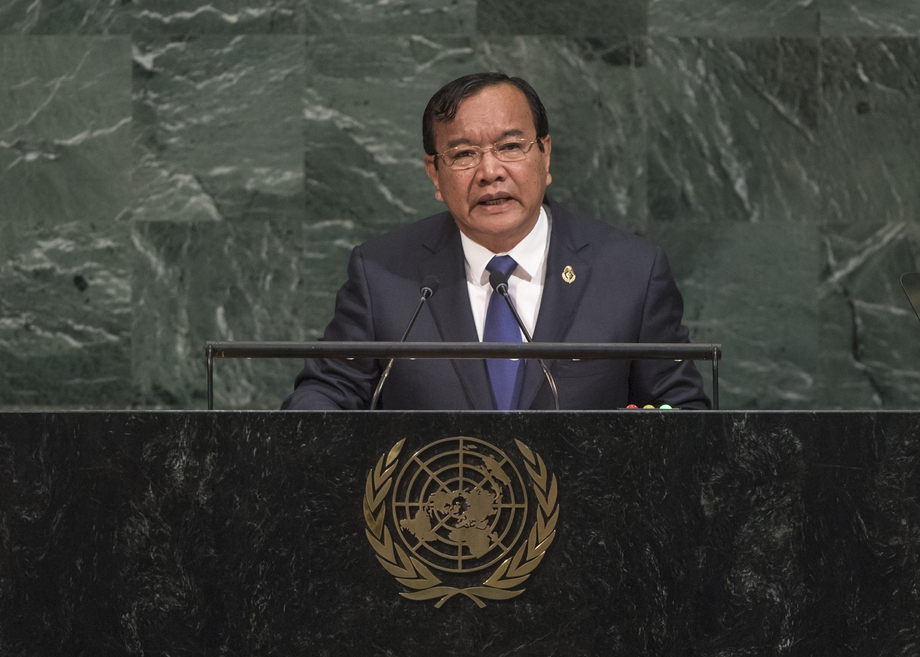 PRAK SOKHONN, Minister for Foreign Affairs and International Cooperation of Cambodia, expressed deep concern about the situation on the Korean Peninsula and appealed to all parties concerned to exercise restraint, avoid provocations and remain committed to dialogue.  The unilateral and illegal embargo on Cuba must also be lifted, he said.  Emphasizing his country’s vulnerability to extreme weather events, he said climate change represented a serious and unprecedented threat to global peace and security.  Recalling that Cambodian peacekeepers were killed and wounded during rebel ambushes in the Central African Republic, he paid tribute to those who had died while serving under the United Nations flag.

Cambodia had no issue with human rights monitoring, so long as it was done in an impartial manner, taking into account all pertinent facts on the ground, and without prejudice or conjecture on the part of observers, he said.  However, the assessment of human rights situations varied according to the political predispositions of certain great Powers.  That also held true for big international non-governmental organizations (NGOs) whose agenda was far from being politically neutral.  “The issue of human rights and democracy is raised only when the specific interests of certain major Powers are at stake, at the vagaries of the moment,” he stated.  “Otherwise, it is a sheer silence, and often a conspiracy of silence.”

He said that, as a survivor of the genocidal Pol Pot regime, it pained him to hear the Special Rapporteur on the situation of human rights in Cambodia refer to the crimes perpetrated by that regime as mere “troubles”.  Partial and biased reports never failed to condemn the Government while portraying the opposition as martyrs of democracy and human rights.  Never were the wrongdoings and illegal behaviour of the opposition mentioned.  History had shown that when Cambodia was forced to choose a path set by some Western Powers, it suffered the worst consequences.  The discourse of certain Governments on human rights and democracy would only be relevant and credible when they subjected themselves to the same standard as others with regard to assessments, criticism and condemnation, he said.