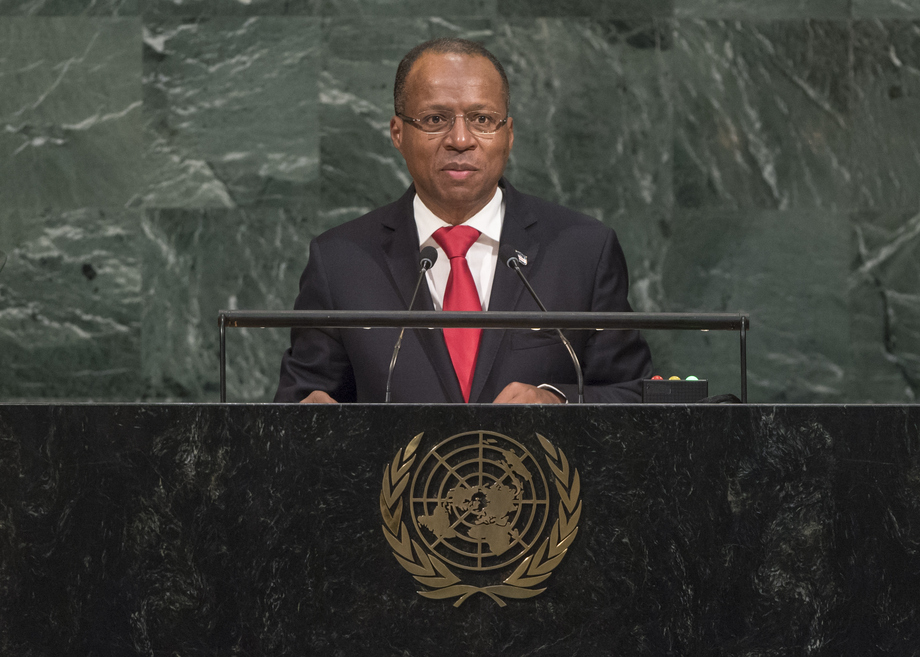 JOSÉ ULISSES DE PINA CORREIA E SILVA, Prime Minister of Cabo Verde, said that, as a small island country, it could only be affirmed within the global economic system with political, institutional and social stability, and by being trustworthy in its relations with partners and investors.  Only by upholding the values of democracy, freedom, human dignity and full citizenship could States create peaceful and secure environments for all.  He expressed concern about the current international context, where new political crises, armed conflict and terrorist acts undermined the rule of law, democracy and States’ territorial integrity.  The security threats were global, as were the challenges and opportunities for their effective combat, he said, asserting that Africa’s permanent representation on the Security Council was fully justified and expressing support for reforms reflecting its addition.

With the 2030 Agenda, he said that humanity had for the first time in history a holistic framework that offered a real opportunity for sustainable and inclusive development.  The United Nations should play a catalytic role in mobilizing resources to tackle the challenges of its implementation.  Intense focus should be placed on middle-income countries, including small islands such as Cabo Verde, which lacked a common approach for the systematic assessment of their financing needs and structural vulnerabilities.  Rapid implementation of the Paris Agreement was a priority for small island developing States and should be for the world.  “Each island that disappears because of climate change will be a nightmare for humanity”, he said.

Rule of law, democracy and protection of human rights were imperative, he said, and should be pursued nationally and internationally.  He emphasized the Secretary-General’s initiative to establish a pact with Member States on the prevention of and response to sexual exploitation and abuse in all United Nations operations.  Cabo Verde had signed most international instruments in varied domains, he said, expressing satisfaction for having taken part in efforts to elaborate an international legal instrument on the conservation and sustainable use of marine biodiversity in areas beyond national jurisdiction.  He also expressed support for convening a diplomatic conference in 2018 that would work on a convention on that issue, which should have safeguards for the specific situation of small island States.  He also expressed strongest support for the International Criminal Court and its founding Rome Statute.

Noting that poet and songwriter Cesária Évora had described Cabo Verde as “10 little grains of sand” in the Atlantic, he said that, despite its small size, his country would position itself as a hub for tourism, air transport, port operations, business development and as a digital and nanotechnological economy.  As outlined in its strategic plan for sustainable development, Cabo Verde would become a useful interlocutor for dialogue, peace and tolerance, forging strategic partnerships.

Happiness was the ultimate right to which people aspired, he said, and the 2030 Agenda had provided the world not only a vision but a road map to bring happiness to people.  “It is in our hands” to support the United Nations in advancing the Happiness Agenda, he declared.