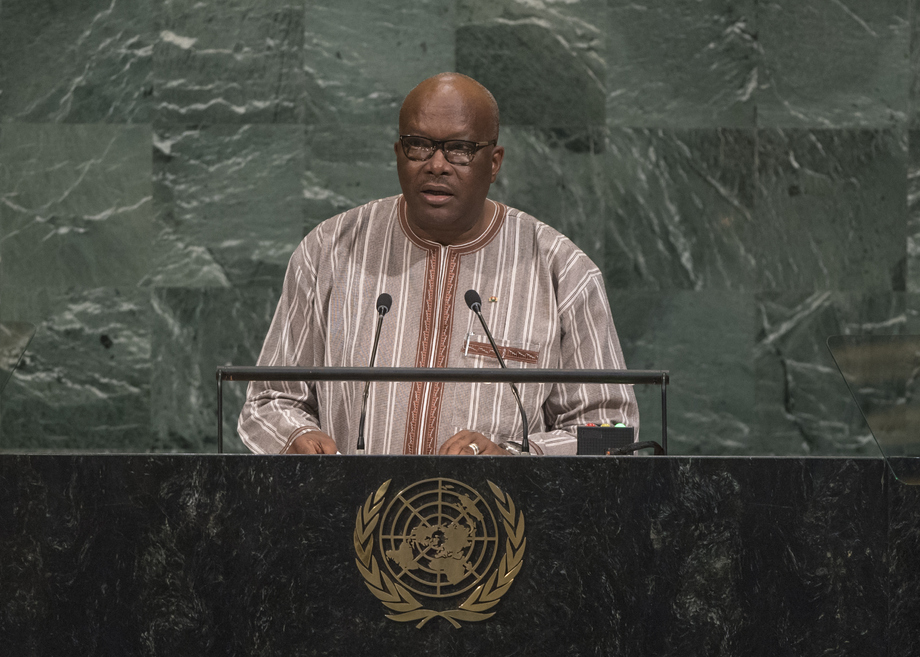 ROCH MARC CHRISTIAN KABORÉ, President of Burkina Faso, said the Assembly was meeting amid the challenges of preserving peace and security, combating extremism and terrorism, eradicating poverty, achieving sustainable development, and creating fairer international order.  Just two years ago, the world had adopted the Sustainable Development Goals, and while the subsequent entry into force of the Paris Agreement had been welcomed, there were still obstacles to creating peace and prosperity.  Every day, men and women died from a lack of care, children did not receive basic education and young people faced the rage of the seas in search of a better future.  There must be a move from rhetoric to action to ensure better results for the world’s people.

For its part, Burkina Faso was committed to economic development, he said, carrying out major structural reforms with a view to attracting investments that strengthened participative democracy.  Citizens were at the heart of the State’s work, while an open Government partnership and the first national action plan were being prepared.  Burkina Faso was working to strengthen its democratic institutions and a draft constitution would soon be submitted to a referendum.  Terrorists had targeted Burkina Faso country and he was fully aware of their desire to destabilize the country and the region.  Combating terrorism was a national priority, although doing so would require a subregional approach, with a focus on economic development in the most vulnerable areas, especially in the north.  Terrorism was a global scourge that struck indiscriminately and it must be clearly condemned by all.

There were a number of hotbeds of tension in Africa, he said, welcoming recent political progress in Mali, although the situation in the north of that country was still volatile.  The international community must work to ensure that settlements were found to conflicts in Libya, Central African Republic, Democratic Republic of the Congo, Somalia, southern Sudan and Burundi.  Greater international efforts were needed in Iraq, Syria and Yemen to ensure those countries did not sink into further conflict.  He condemned the nuclear test carried out by the Democratic People’s Republic of Korea, which was a threat to the world.  The proliferation of small arms and light weapons was one of the major risks to international peace and security.

Stressing that multilateralism was the best possible tool for dialogue and solidarity, he called for a complete lifting of the embargo against Cuba so that Havana and Washington, D.C., could enjoy a mutually beneficial partnership.  Reform of the United Nations was still a central issue that must be tackled with conviction and calmness, particularly with regard to fairer representation of Africa on the Security Council.  It was incumbent on all States to offer citizens hope for a better future so they could leave subsequent generations with a safer world.