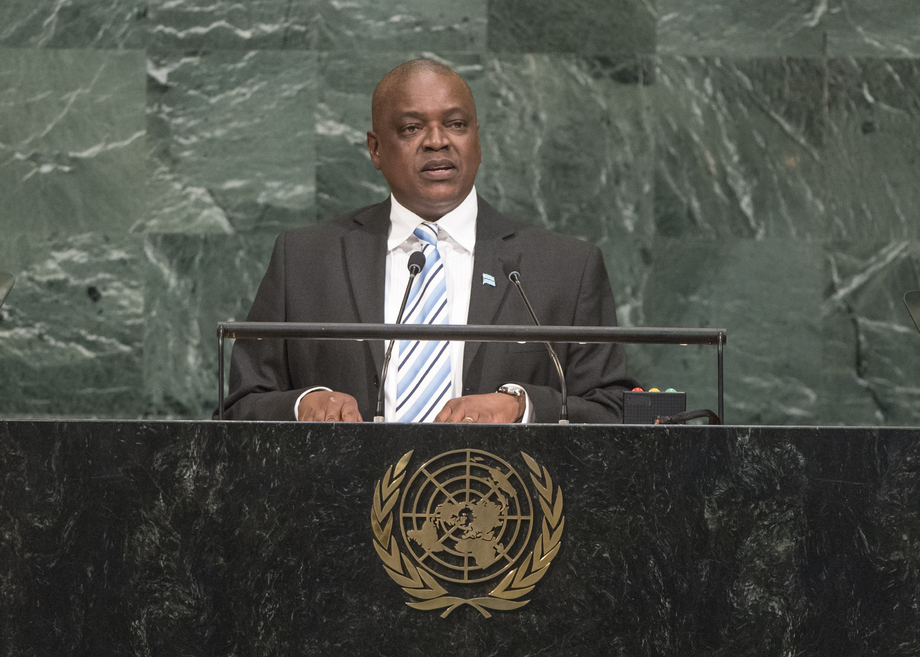 MOKGWEETSI E.K. MASISI, Vice-President of Botswana, said the United Nations was the only universal organization with the moral authority to seek solutions to the world’s challenges.  Recognizing the importance of the 2030 Agenda and the Paris Agreement, he said Botswana had held several multi-stakeholder consultations in the formulation of both its national development plan for 2017‑2023, and “Vision 2036” plan for 2017‑2036, from a belief that national priorities must reflect people’s needs.  Those frameworks sought to accelerate development by addressing education, health care, housing, poverty, income inequality, gender inequality and unemployment.

Citing gains, he said the number of people living in abject poverty or below $1.25 per day had fallen from 24.5 per cent in 2002 and 2003 to 6.4 per cent in 2009 and 2010.  Over two decades, Botswana had invested 25 per cent of its annual budget in education and skills development, and implemented an economic stimulus programme, achievements it had shared this year during its high-level political forum voluntary national review.  On climate change, he urged all countries, including the United States, to protect the integrity of the Paris Agreement, and welcomed the convening of the first-ever Ocean Conference, reiterating that, although landlocked, Botswana had interest in the ocean environment and marine resources.

On the humanitarian front, he said Botswana had responded to numerous humanitarian calamities, including the famine in Somalia.  Citing reports of conflict, human rights violations, extra-judicial killings, sexual violence, arbitrary arrest and detentions, he said the situation in South Sudan was a grave concern.  He appealed to the Intergovernmental Authority on Development (IGAD) to ensure implementation of the 2015 Agreement on the Resolution of the Conflict in the Republic of South Sudan.  The political, security and humanitarian situation in Syria was catastrophic, and he expressed disappointment in the Security Council’s failure to take decisive action, suggesting that the General Assembly use its moral power amid such paralysis.  He supported referral of the situation to the International Criminal Court to ensure those responsible for war crimes and crimes against humanity be held accountable.

He expressed concern that the Democratic People’s Republic of Korea had contravened international law and United Nations resolutions, and called for swift enforcement of the United Nations Charter.  “Regime change must be brought about in order to remove once and for all this everlasting threat to peace in that region,” he declared.  Further, it was “reprehensible” that Western Sahara remained the only Non-Self-Governing Territory in Africa and it was time for an independent, impartial plebiscite to be held under United Nations supervision.  He similarly supported Palestinians in their struggle for sovereignty and independent statehood, announcing that Botswana established diplomatic relations with Palestine on 8 March.  Strongly condemning terrorism, violent extremism and racial intolerance, he reaffirmed Botswana’s commitment to international instruments banning weapons of mass destruction.  Botswana valued the opportunity to contribute to the promotion and protection of human rights through its membership to the Human Rights Council over two consecutive terms.