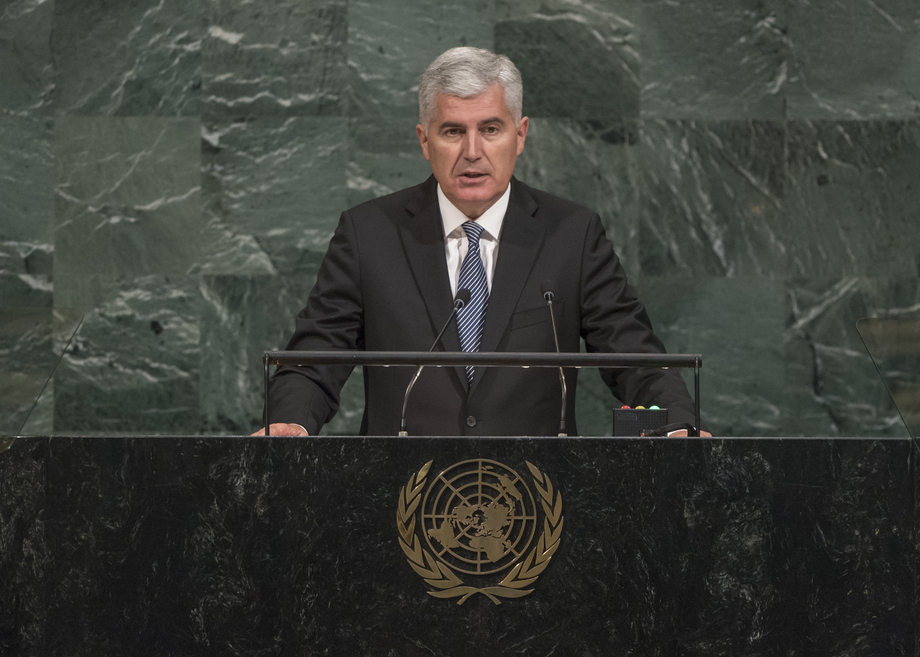 DRAGAN COVIĆ, Chairman of the Presidency of Bosnia and Herzegovina, underlined the importance of bringing the United Nations “closer to its chaotic surroundings”, and adapting it to anticipate the world’s emerging challenges.  Emphasizing that the crisis in Syria continued unabated, he strongly condemned all forms of violence against that country’s civilian population.  “Each Syrian child, woman and man, and each Syrian refugee, must have its dignity as a human being restored,” he stressed, calling for a peaceful political solution to that conflict through dialogue.  Further, there could be no peace or prosperity for Israelis if the same was not provided for Palestinians — and vice versa.  The absence of negotiations on that issue was disturbing, he said, stressing that both parties must fulfil their obligations based on Security Council resolutions, the Madrid Principles and the Arab Peace Initiative.

“Evil has always existed, throughout human history,” he said, noting that it was sometimes on the margin of communities.  Terrorism was undoubtedly today’s greatest evil, with deep-rooted destructive forces.  Emphasizing that there was no justification for terrorism, he called for joint and concerted efforts to combat that phenomenon, and pledged Bosnia and Herzegovina’s support to the United Nations Global Counter-Terrorism Strategy and the activities of its Counter-Terrorism Committee.  As a member of the global coalition to counter Islamic State in Iraq and the Levant (ISIL/Da’esh), it would continue to support efforts to liberate communities and help them recover.  The eradication of terrorism and violent extremism also required investments in a spectrum of interconnected areas, from ending injustice and inequality to fighting poverty and the lack of freedom.  Disarmament and non-proliferation were still prerequisites for global peace and security, he added, voicing strong condemnation of the recent nuclear tests conducted by the Democratic People’s Republic of Korea and calling on that country to comply fully and unconditionally with relevant Security Council resolutions.

To implement the 17 Goals laid out in the 2030 Agenda for Sustainable Development, countries must overcome various weaknesses, he said, stressing:  “Strong political will and decisive practical steps in the right direction will not always be enough.”  Implementation would require knowledge and norms that many Member States did not possess or that might add burdens to already encumbered State budgets.  Assistance in formulating strategies and policies was critical, as was the transfer of technologies, the provision of financial resources and support in measuring progress.  Those efforts must go along with countries taking full ownership of the process.  “We expect the countries that have been a bit faster and more successful on this path to unselfishly share the best experiences and give recommendations, while the countries facing difficulties need to be willing and ready to accept new and different ways of resolving them,” he said.

Bosnia and Herzegovina unfortunately understood the high price of war, he continued.  Preventive diplomacy was a tool that, when used at the right time, could help ensure that war was never repeated.  The United Nations must be at the heart of all efforts to use preventive measures to resolve crises and prevent people from leaving their homes.  Communities themselves must counter all the symptoms of trouble and conflicts, including by correcting social injustice and persevering in compromise.  For its part, Bosnia and Herzegovina participated in several United Nations peacekeeping missions, including in South Sudan, Cyprus and Afghanistan.  It was also working to speed reform at home, in the framework of the European family.  Yet, “one people in Bosnia and Herzegovina cannot be happy and prosperous if the other two are not”.  It was up to its people to adopt changes to the country’s electoral laws by the end of the year, in accordance with the ruling of its constitutional court, he said, expressing hope that the international community would provide support in that regard.