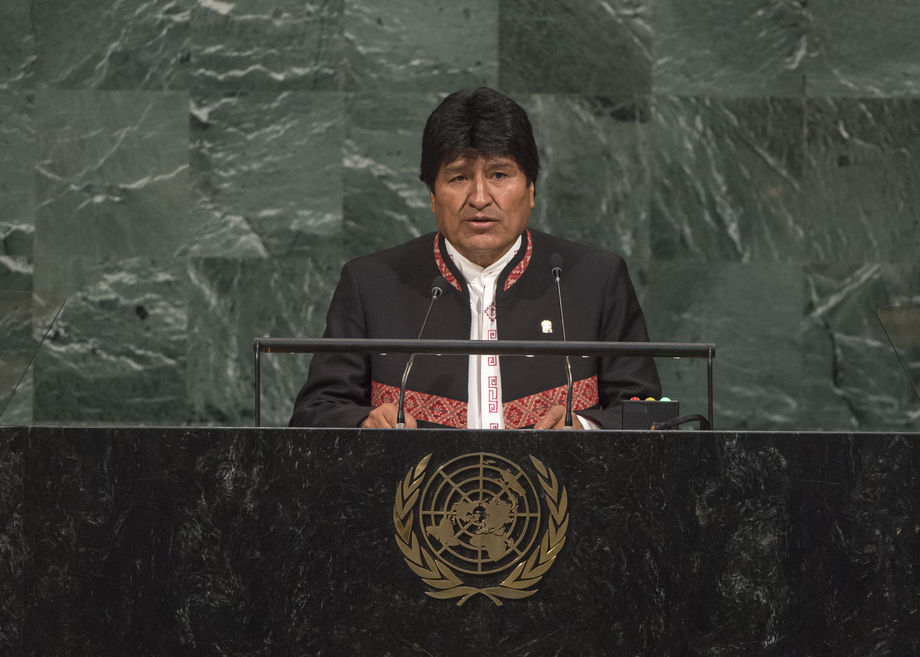 EVO MORALES AYMA, President of Bolivia, expressing solidarity with the people of Mexico following that day’s earthquake, said that much of the promise of the United Nations had come to nothing.  Rather than making progress, the world was slipping backwards.  War and violent conflict had persisted, while 2017 was the hottest year in world history.  Emphasizing that all countries must comply with the Paris Agreement, he said it was unjustifiable that the United States had decided to turn its back on that instrument.  That country was among the main polluters and its Government had become a threat to Mother Earth, he said.

Water was the lifeblood of Mother Earth, he said, and that resource must be respected, shared and protected for future generations.  Bolivia promoted the recognition of water as a human right, he said, noting that its Constitution prohibited the exploitation of that resource for profit.  Where water flowed, so too did peace, he said, adding that it must never be a source of conflict.

The world was also more unjust and unequal, he said.  Inequality was immoral.  Calling for the establishment of universal citizenship, he said the migration crisis was the product of a world order dominated by greed, inequality and the destruction of Mother Earth.  No migrant was illegal and walls ran counter to the history of mankind, he said.  There should be no difference between a foreigner and a national.

Urging the United States to end its blockade of Cuba, he said new measures announced by President Trump would reverse progress made in relations between those two countries.  The United States must also provide economic reparations to Cuba and return Guantanamo to Cuban sovereignty, he said, recalling that Fidel Castro and Che Guevara, speaking in the General Assembly, had warned against imperialism.

Bolivia welcomed the peace process in Colombia and the incorporation of the Revolutionary Armed Forces of Colombia-People’s Army (FARC-EP) into political life, he said.  Condemning unilateral sanctions and threats of invasion made by the United States Government against Venezuela, he said “our region is nobody’s backyard” and expressed solidarity with that country’s President and people.  The Palestinian cause could not be abandoned, he said, demanding implementation of the two-State solution.  He hailed efforts by the Russian Federation, Iran and Turkey towards a ceasefire in Syria.  He went on to say that any military solution on the Korean Peninsula must be avoided and negotiations resumed.  “We must fight capitalism, colonialism and imperialism,” he said, adding that success in that regard would lead to equality, social justice, peace and development.