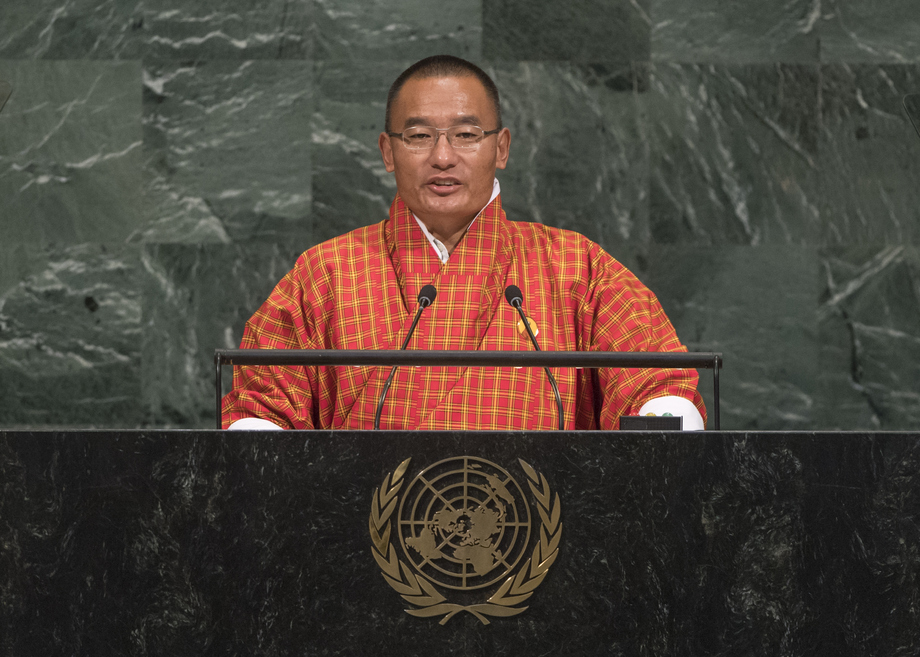 DASHO TSHERING TOBGAY, Prime Minister of Bhutan, said experts were increasingly convinced that natural disasters like hurricanes and floods were worsened by climate change.  The world must take urgent action to ensure the survival of future generations.

Bhutan, a landlocked and mountainous country, was particularly vulnerable to the effects of climate change.  Having experienced flash floods, glacial lake outbursts and severe and erratic weather patterns, it had ratified the Paris Agreement and was on its way to fulfilling its pledges.  Bhutan was a carbon-negative country, as 72 per cent of its territory was under forest cover and more than half of it was protected as natural parks, wild life sanctuaries and natural reserves.  The country also generated and exported clean renewable energy and invested in both green industries and organic farming.

However, fighting climate change was complex and expensive, he stressed.  It was crucial that climate financing mechanisms were introduced so that all countries, especially smaller ones challenged to secure funds, received help.  He applauded the creation of the Global Environmental Facility and Green Climate Fund.  However, there was a need to expand both those instruments so that more countries could better address climate change.  “While the threat of natural disasters will always remain, we can ensure that they are not directly linked to human-induced activity,” he said.

Poverty was another challenge that required funding, he said, stressing that it had no place in an age characterized by unprecedented wealth, knowledge and technology.  “Millions are condemned to a life of poverty.”  However, one estimate had found that it would take $175 billion per year — only 0.32 per cent of the current global gross domestic product (GDP) — to end extreme poverty.  Reforms initiated by the Secretary-General would allow the United Nations to bring about shared prosperity.  He cited Bhutan’s progress in reducing multidimensional poverty, stressing that it was on track to lowering to 5 per cent within the next few years.

On the issue of terrorism, he welcomed reforms aimed at helping the United Nations better fight that scourge, adding that they must include better representation of countries such as India, Brazil and Japan, as well as African nations, in the Security Council.  However, maintaining global peace and security ultimately was the responsibility of each country.  “Every country must protect the rights of its citizens, strengthen participatory Government, and enable economic opportunity for all,” he emphasized.