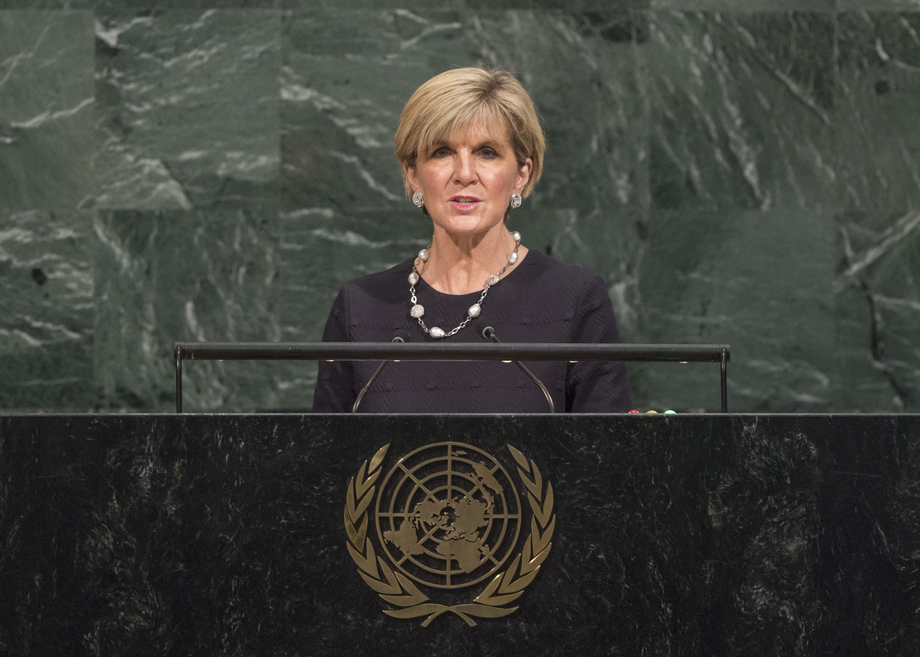 JULIE BISHOP, Minister for Foreign Affairs of Australia, said the world faced challenges that threatened its rules-based order.  Also under threat was the authority of the Security Council, with the Democratic People’s Republic of Korea’s actions representing the most egregious example.  While the Council had responded to that country’s recent nuclear weapons and missile tests with tough new economic sanctions, it was crucial that all Member States, especially the Council’s permanent members, strictly implement them to compel Pyongyang to abandon its illegal programmes.

For its part, Australia had put in place a range of autonomous sanctions beyond what the Council had mandated, she explained, and would explore further options should the Democratic People’s Republic of Korea continue its flagrant disregard of the views of the international community, as upheld by the Council.  Terrorism, and the extreme Islamist ideologies driving it, must be confronted and defeated.  Describing the use of chemical weapons — as had been confirmed in Syria — as another serious threat, she expressed support for the work of the United Nations and the Organization for the Prohibition of Chemical Weapons (OPCW) in identifying those who had deployed those appalling, illegal weapons.  Her country also chaired the 42-member Australia Group, which worked to prevent the spread of chemical and biological weapons, she said.

As the first nation to deploy military observers into the field in 1947, Australia supported efforts to ensure that United Nations peacekeepers were better trained, better equipped, more effective and acted with greater integrity, she said.  She welcomed the Secretary-General’s commitment to making the Organization a more effective defender and upholder of the rules-based order.  Urging all Member States to work together to those ends, she went on to outline other urgent challenges, ranging from sustainable and inclusive development to economic resilience to addressing the impacts of climate change and tackling modern-day slavery.  On the latter, she emphasized that forced labour, child labour and human trafficking were rampant, and outlined Australia’s efforts to address those crimes through a regional business-Government partnership launched jointly with Indonesia in August.