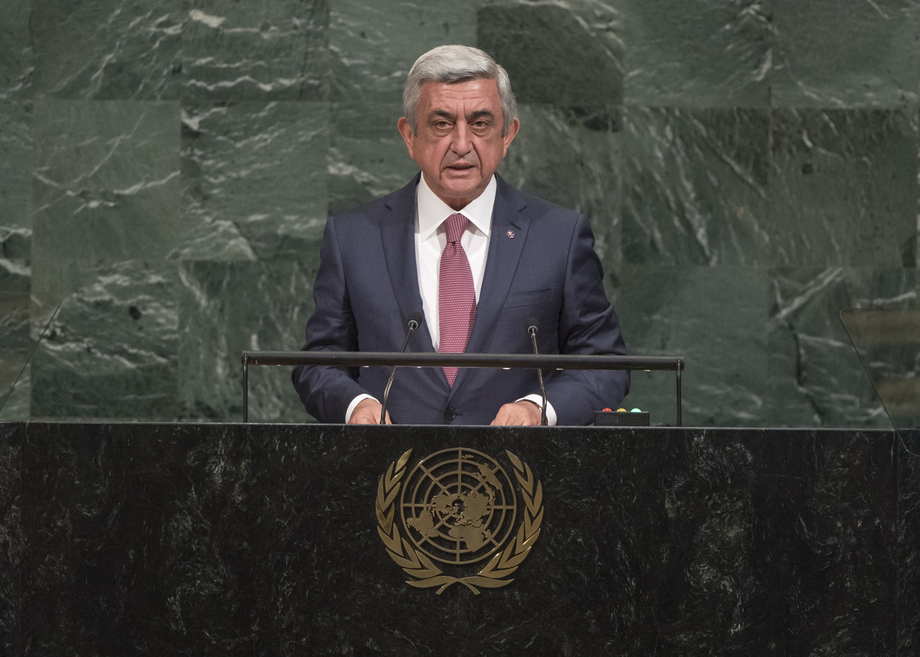 SERZH SARGSYAN, President of Armenia, noting that 2017 marked the twenty-fifth anniversary of his country’s succession to the United Nations, said Nagorno-Karabakh remained a major challenge for his nation.  Azerbaijan had no legal or moral grounds to lay claim to Artsakh, whose people must never be isolated from implementation of the Sustainable Development Goals.  Armenia would contribute to improving living conditions in Artsakh, he said, adding that his country strongly believed that there was no alternative to a peaceful solution to the Nagorno-Karabakh conflict.  All available international and domestic mechanisms should guarantee the security of Armenian people in Artsakh.

He said he was grateful for those countries, individuals, State bodies and regional organizations that had recognized the Armenian genocide.  In doing so, they had called things by their proper name, he said, noting that 2018 would mark the seventieth anniversary of the Convention on the Prevention and Punishment of the Crime of Genocide.  On that occasion, Armenia would present a new initiative, inviting all Member States to support it.

Turning to Armenia’s relations with Turkey, he said that country’s leaders were mistaken if they thought they could hold the Zurich Protocols hostage forever.  Normal relations between neighbouring States were needed to discuss disagreements and find solutions, he said.  Armenia was an active member of the Eurasian Economic Union and in that regard it was sparing no effort to contribute to the unimpeded movement of goods and services in the region while promoting the welfare of all.  In November, Armenia planned to conclude a partnership agreement with the European Union that would give new impetus to institutional reforms.

Instability in the Middle East remained a serious challenge, he said, adding that Armenia was following the crisis in Syria with great pain.  Within its means, Armenia was providing humanitarian assistance, and it was also willing to engage in peacemaking efforts under United Nations auspices.

Emphasizing his country’s participation in United Nations peacekeeping operations, he said it was prepared to increase its contribution to the United Nations Interim Force in Lebanon (UNIFIL) and MINUSMA.  As a landlocked country in a complicated region with few of its own natural resources, Armenia considered people to be the most valuable resource.  “We should focus on people and strive for peace and a decent life for all on a sustainable planet,” he said.