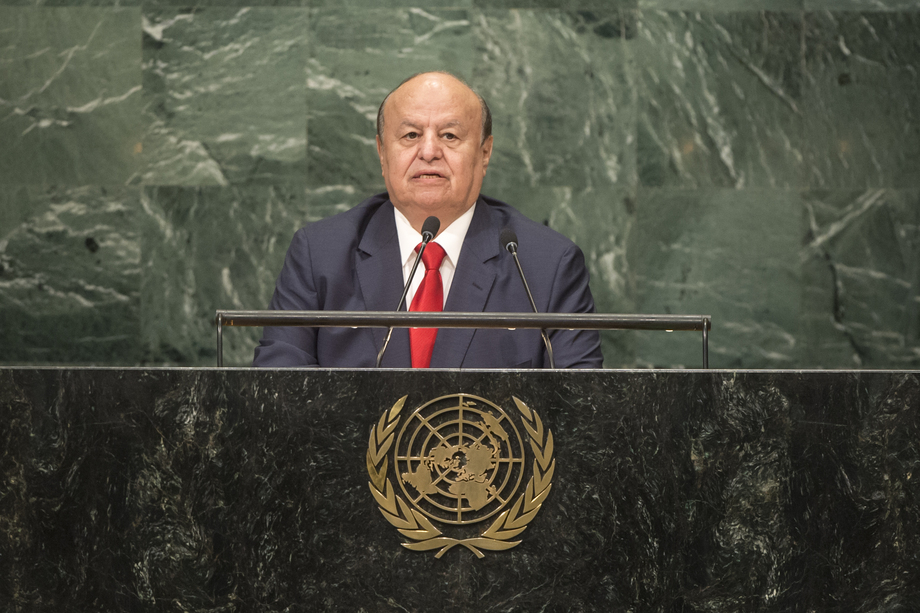 ABDRABUH MANSOUR HADI MANSOUR, President of Yemen, said his country continued to face challenges, yet the leadership was working in full force.  “Militias have no chance in succeeding,” he said, adding that the Government would soon put an end to the ongoing war and tragedies.  Recalling the steps taken in the Gulf Cooperation Council on the path to political transfer, he said that comprehensive dialogue had been translated into a new civilian Constitution.

Despite all efforts, the Houthi militias continued to wage war and kill innocent people, expel civilians, blow up homes and control national assets, he continued.  “We are not advocates of revenge,” he said, adding that the Government had chosen the path of peace in order to end the suffering of the Yemeni people.  In that regard, national dialogue was necessary to build a federal State based on equal rights.  Stressing the need to rid Yemen of militias and sectarian gangs, he said they must withdraw and endorse the new Constitution.

He went on to underline that extremism and sectarianism sponsored by Iran would create further terrorism and brutality.  The Houthi coup d’état had created similar outcomes, including a security vacuum, economic collapse and extreme poverty.  The militias had recruited children, besieged cities and waged a meaningless war against the Yemeni people, whose suffering had reached unbelievable levels with regard to health, education and other services.

After the coup d’état, the leadership had continued its efforts to reduce the consequences of the chaotic war that had been launched against the people of Yemen, he said, adding that, as his patience had run out, he had ordered the relocation of the Central Bank to the southern city of Aden.  That would escalate pressure on the Houthi rebels controlling the capital, he said, while acknowledging that it would also cause greater hardship for millions of Yemenis living under their rule.  “We might fail to pay the salaries of people working in public service,” he said, calling for support from the free world and its financial institutions.  Acknowledging the catastrophic situation in Yemen, he renewed his call on all donor countries to fulfil their pledges and end the suffering of the Yemeni people.  The country would emerge from the ruins with international support, and the Government would not stop until the militias were defeated, he vowed.