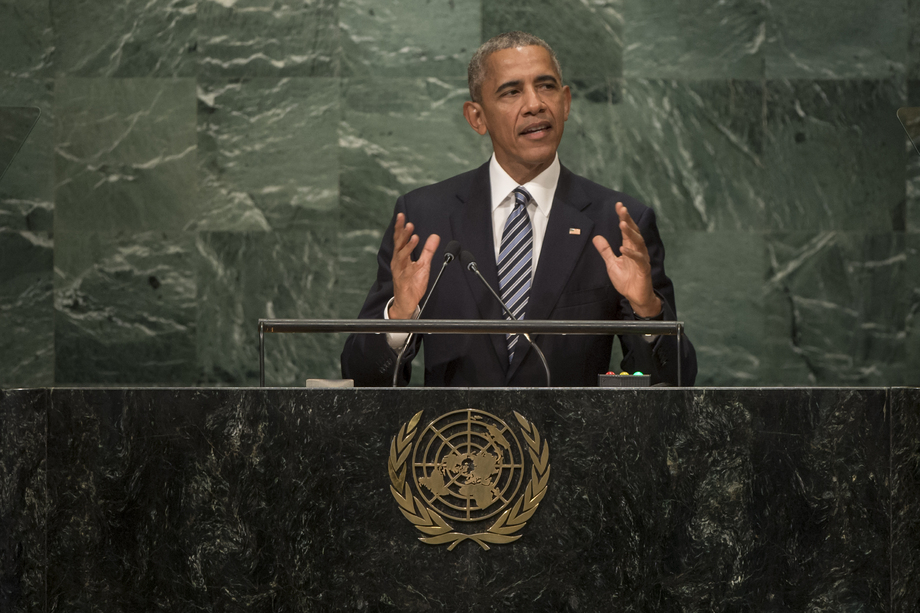 BARACK OBAMA, President of the United States, said steps had been taken to return the global economy to growth, remove terrorist safe havens and strengthen the nuclear non-proliferation regime.  Assistance had helped power communities across Africa and promoted models of development, rather than dependence.  Yet, the forces of globalization had also exposed deep fault lines in the international order:  refugees flowed across borders fleeing conflict, while financial disruptions weighed on workers and communities; basic security and order had broken down in vast swaths of the Middle East; and too many Governments had muzzled journalists, while terrorist networks used social media to foment anger.  That was the paradox defining the world today.  Twenty-five years after the end of cold war, the world was less violent and more prosperous by many measures, yet societies were filled with uncertainty, unease and strife.  People had lost trust in institutions and governing had grown more difficult.  “At this moment, we all face a choice” — to press forward with a better model of cooperation and integration, or retreat into a world sharply divided along age-old lines of nation, race and religion.  “We must go forward and not backward,” he emphasized.

Though imperfect, open markets, accountable governance, democracy, human rights and international law were the firmest foundation for human progress in the present century, he said.  The path to global integration required a course correction.  Leaders had ignored equality in and among nations, while international institutions were too ill-equipped and underfunded to handle transnational challenges.  Alternative visions of the world had emerged from religious fundamentalism, and from the politics of ethnicity, tribe or sect, aggressive nationalism, and crude populism, all of which sought to restore a simpler age, free from outside contamination.  While those visions could not be dismissed, they also could not deliver security or prosperity because they failed to recognize a common humanity.  The answer could not be a rejection of global integration, he stressed.  Rather, there was a need to work together to ensure that the benefits of integration were shared, and that its economic, political and cultural disruptions were addressed.

The international community must make the global economy work better for all people, not just those at the top, he said.  While open markets and capitalism had raised living standards, global capital had too often been unaccountable, with $8 trillion “stashed in tax havens”.  A pervasive sense of injustice had undermined faith in the global system.  Another path offered the clearest route to national success:  economies were more successful when growth was broadly based, respecting workers’ rights, investing in peoples’ skills and education, and strengthening the safety net that protected people from hardship.  Advanced economies must do more to close the gap with poor nations, he said.  The Paris Agreement on climate change offered a framework for action, and there must be a sense of urgency about its entry into force, he said.  In the same way, there was need for new, inclusive and accountable governance models.  Believing in a liberal political order, built through elections, respect for human rights and civil society, independent judiciaries and the rule of law, he said strong men would be left with two choices:  permanent crackdown or scapegoating enemies abroad, which could lead to war.  Successful countries were those in which people felt they had a stake.  Too often, in capitals, decision makers forgot that decisions were made from the bottom up, he noted, underlining that leaders advocating democracy abroad must strive harder to set a better example at home.

In that context, he called for rejection of any form of fundamentalism, racism or belief in ethnic superiority, urging instead tolerance for all human beings.  The mindset of sectarianism, extremism and retribution would not be quickly reversed, he cautioned, saying:  “We must be honest about the nature of those conflicts.”  While there was a military component to destroy networks like Islamic State in Iraq and the Levant (ISIL/Da’esh), there was no military victory to be won in Syria, where diplomacy must be pursued, aid delivered and support given to those working for a political settlement.  “We all have to do better as leaders in tamping down, rather than encouraging, a notion of identity that leads us to diminish others.”  States must sustain a commitment to international cooperation rooted in the rights of individual nations, he said.  The United Nations could only realize its aims if powerful nations, such as the United States accepted constraints.  There was a darker view of history to adopt:  one in which humans were motivated by greed and power, big countries pushed smaller ones around, and States defined themselves by what they hated.  “Perhaps that’s our fate,” he said.  “Each of us, as leaders, each nation, can choose to reject those who appeal to our worst impulses and embrace those who appeal to our best.”