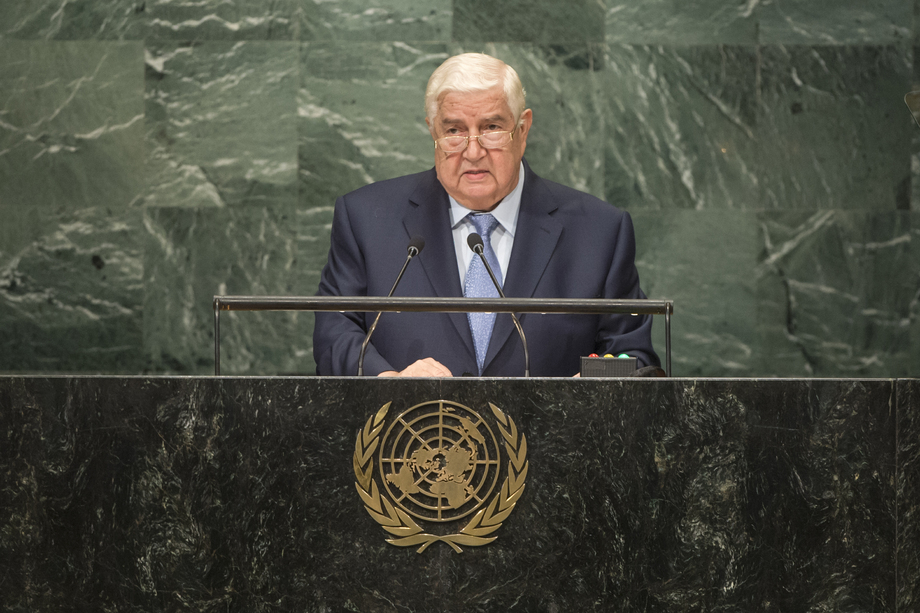 WALID AL-MOUALEM, Deputy Prime Minister and Minister for Foreign Affairs of Syria, said his people had paid dearly for the crimes of terrorists who had undermined their security, stability and livelihoods.  It was no secret that Qatar and Saudi Arabia had played a role in spreading terrorism throughout Syria, promoting their Wahhabist ideology and equipping mercenaries with sophisticated weapons.  Meanwhile, Turkey had opened its borders and provided logistical support to tens of thousands of terrorists from around the world, he said.

In spite of that, Syrians would not relent in the fight, he vowed, saying that their belief in victory was even greater now that the Syrian Arab Army — with the support of the Russian Federation, Iran and the Lebanese national resistance — had made great strides in the war.  While welcoming international efforts to fight terrorism in Syria, he emphasized the need to coordinate with the Government, warning that any uncoordinated action would be considered a breach of sovereignty and a violation of the United Nations Charter.  As such, the Syrian Government strongly condemned the attack on a Syrian army site near Deir ez-Zor Airport by United States warplanes on 17 September, he said.

He went on to condemn Turkey’s incursion into Syrian territory, calling for an end to “this flagrant aggression”.  Any solution to the crisis must follow parallel counter-terrorism and political tracks through the intra-Syrian dialogue, which would enable Syrians to determine the future of their country without foreign interference.  Despite hurdles created by regional and Western States on behalf of the self-proclaimed “Syrian opposition”, the Government had always been open to a political track that would stop the bloodshed and end the prolonged suffering of Syrians.  On that note, he reiterated his Government’s commitment to moving forward with the Geneva peace talks, under the auspices of the United Nations.