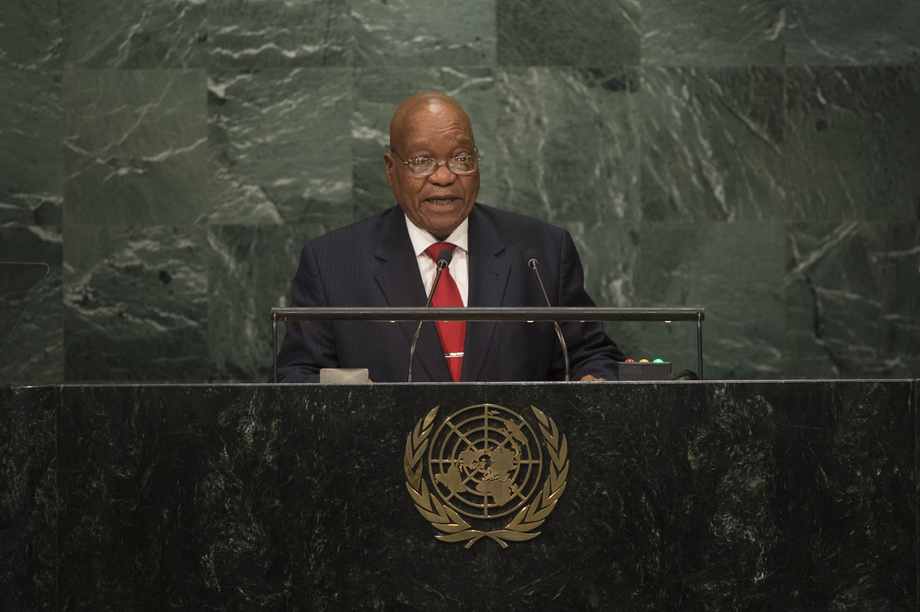 JACOB ZUMA, President of South Africa, said that this year marked his country’s sixtieth anniversary of the women’s march against discriminatory and racist laws and the fortieth anniversary of the 6 June youth uprising against apartheid.  Both events had marked turning points in the struggle against minority rule, and in the past two decades, his country had made significant strides reversing the impact of underdevelopment and the legacies of colonialism and apartheid.  However, to develop faster, Africa had to address inadequate infrastructure, exposure to commodity price volatility and limited investment in such areas as science and technology, among other constraints.

His country, he continued, had implemented a national development plan aligned to the African Union’s Agenda 2063 as well as the 2030 goals, at the core of which was the focus on poverty eradication and uplifting the standard of living.  Industrialization was critical to Africa’s prosperity and the continent should not be excluded from the fourth or new industrial revolution.

Such development plans all depended on resource availability and he expressed concern over illicit financial flows, which deprived developing countries of much-needed economic resources.  The joint African Union and United Nations Economic Commission for Africa’s high-level panel estimated that illicit flows from the continent could total $50 billion annually.  His country remained committed to efforts to combat this problem, including the Organisation for Economic Co-operation and Development (OECD) Base Erosion and Profit Shifting Action Plan.  That initiative sought to curb efforts by multinationals to reduce taxable income or move profits away from high-tax jurisdictions to low-tax ones.

Inclusive growth, he said, was a peace, security and prosperity imperative, but would only remain a “distant dream” if powerful nations continued to put national interests ahead of global ones.  His country remained committed to the peace and security architecture of the African Union, which had resolved that the continent must “silence its guns” by 2020, and he urged Member States to support that goal.  Beyond Africa, the conflict in Syria bore the “hallmarks of the failure of a regime change agenda”, and questioned whether the United Nations and the Security Council were still fit for their purpose of acting in collective interest rather than that of a few States.  His country would continue calling for a transformation of the Organization and the Council in particular to ensure Africa’s representation.  “One billion people cannot continue to be denied a voice,” he said.