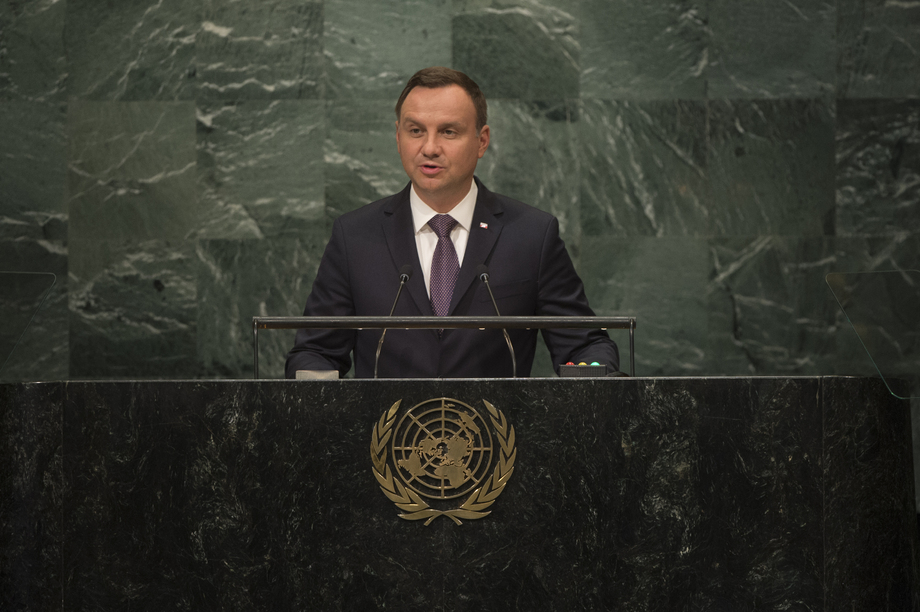 ANDRZEJ DUDA, President of Poland, said that without responsibility, solidarity and justice, it would not be possible to achieve sustainable development.  Responsible development was essential to preserving continuity between generations.  When respect for tradition was absent and social engineering was applied instead, development would not take place.  Family was the basic form of the human community, he said, adding that his Government was implementing an ambitious programme with a view to improving the living conditions of children.

He went on to emphasize that implementation of the 2030 Agenda called for responsible policies and care for the environment.  “The climate is a common good, belonging to all and meant for all,” he said, expressing concern about climate change resulting from human activities.  States had demonstrated at the Paris Climate Conference in 2015 that they were capable of making responsible decisions and adopting a new climate agreement.  However, responsibility for the environment required more than mere interventions to reverse the effects of climate change.

A development model based on solidarity could produce a system that would provide equal opportunities for all and eliminate social exclusion, he continued.  For their part, Governments must take the necessary measures to improve the quality of life of their citizens.  “We want solutions which actively involve all social groups in the development processes,” he emphasized, noting that they would eradicate poverty and exclusion.

At the international level, solidarity among countries was necessary to meet the needs of those affected by conflicts, economic crises or natural disasters, he said.  Expressing concern about the growing numbers of people affected by such problems, he said Poland had increased its humanitarian and development assistance to the Middle East.  On justice, he said that making the world a better place would not be possible without safeguarding international law, under which States were equally obliged to uphold their commitments.  Any actions violating State sovereignty must be categorically denounced by the international community, he stressed.