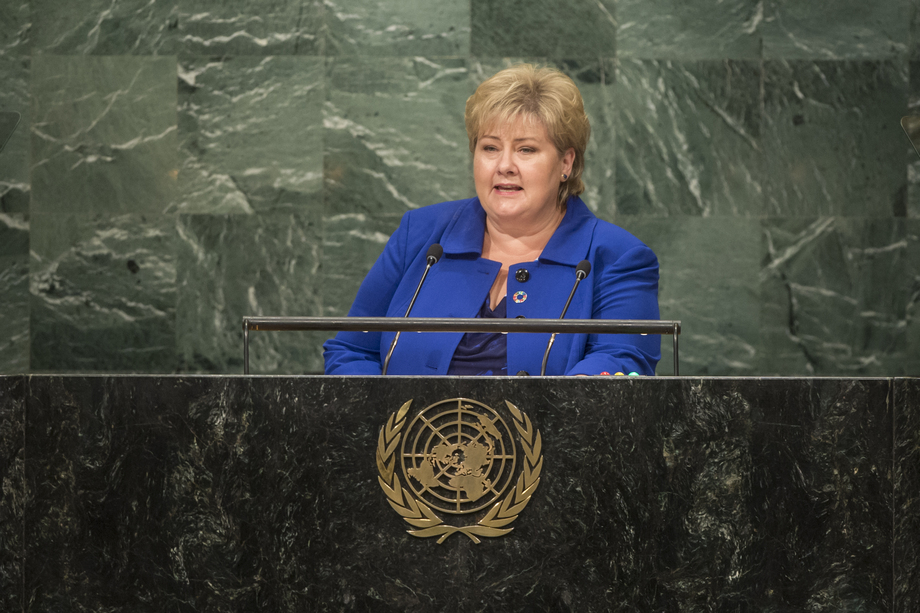 ERNA SOLBERG, Prime Minister of Norway, said that recent violations of United Nations principles had caused wide-spread insecurity in Syria, Yemen, Ukraine, South Sudan and elsewhere.  The world had also come together, as demonstrated with the Paris Agreement and the 2030 Agenda.  In going forward, “we cannot let fear guide our actions”, she said, or return to a world of zero-sum games, narrow national interests and protectionism.  Rather, it was important to rally around the multilateral system.  In Europe, some States, ignoring international law, had pursued national interests at the expense of others.  Instability in the Middle East and North Africa had led to violent extremism there and in Europe.  The solution should be to cooperate.  In Syria, global and regional Powers must take action “right now” to ensure a lasting ceasefire and humanitarian access.  The world expected the Security Council and the International Syria Support Group to deliver.  Likewise, she urged Israelis and Palestinians to address threats to the two-State solution by implementing recommendations by the Middle East Quartet.

More broadly, she called for intensified efforts to tackle the humanitarian impacts of today’s crises, emphasizing that Norway would continue to provide record levels of aid to Syria and South Sudan, among others.  The United Nations’ ability to help countries emerging from conflict must be enhanced.  To better combat terrorism, it was important to work with civil society, women, young people, faith leaders and local communities.  Peace operations must deliver on their mandate to protect civilians.  Sexual exploitation and abuse must stop.  “We need zero tolerance and resolute action by the United Nations,” she said, while humanitarian workers must be equipped with the resources they needed.  Her country would continue to support reform of United Nations peace operations, she said, noting that, with Cuba, Norway had facilitated the peace process in Colombia.

She also urged strengthening the United Nations human rights pillar, financially and politically.  With 263 million children around the world were out of school, rights to education and health were imperative.  Along with the Presidents of Chile, Indonesia and Malawi, and the Director-General of the United Nations Educational, Scientific and Cultural Organization (UNESCO), she had initiated the International Commission on Financing Global Education Opportunity, and had submitted recommendations to the Secretary-General on 18 September.  Another priority was to enhance epidemic preparedness and global health security by developing vaccines that could prevent new outbreaks, efforts that required cross-border partnerships.  On climate change, she said the ocean was already an energy source and she encouraged its further development to meet clean and renewable energy needs.