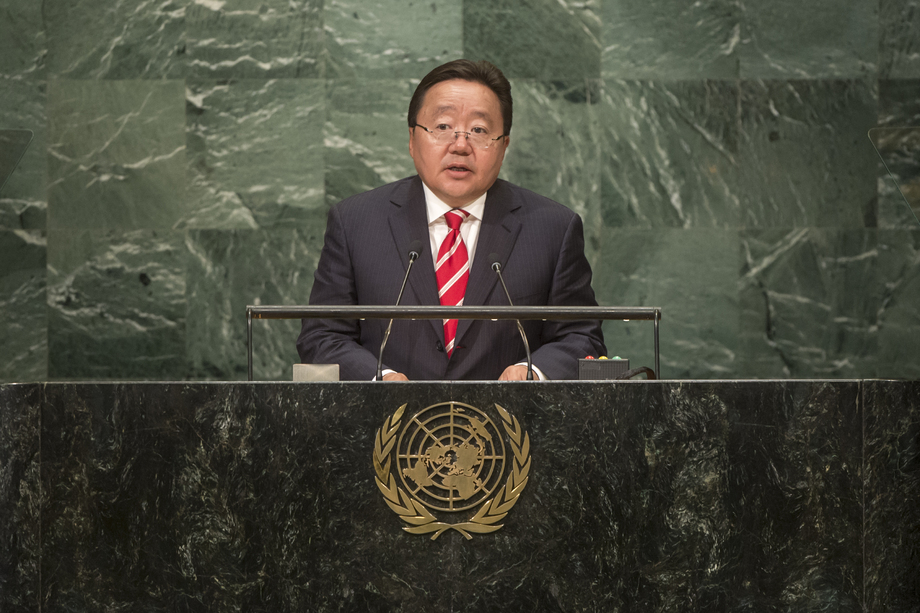 ELBEGDORJ TSAKHIA, President of Mongolia, making his seventh and last address to the General Assembly, emphasized the need to achieve sustainable development.  Mongolia had incorporated the 2030 Agenda into its national development strategy and ratified the Paris Agreement.  His country was among the world’s smallest carbon emitters, but it suffered disproportionately from climate change, with desertification, deforestation and loss of biodiversity dealing a blow to its traditional nomadic culture.  Promised international cooperation and support were lacking, he said, urging multilateral institutions to take the lead with regard to green funds and carbon credits.

Development and accountability were all about democracy, which should never be taken for granted, he continued.  It should be the common goal of leaders to provide an environment in which democratic institutions could thrive.  Member States also had the primary responsibility to uphold human rights.  In that regard, Mongolia had embarked on a new phase of legal reform and abolished the death penalty.  “I believe that, one day, our loving human family will become free of the death penalty,” he said.  He went on to note his country’s membership in the Human Rights Council, saying that body must act effectively to create a global culture based on respect for human rights and dignity for all.

He recalled that Mongolia had successfully hosted the eleventh Asia-European (ASEM) summit in July, where leaders from the two regions reaffirmed their determination for joint action to consolidate peace, security and stability.  ASEM multilateralism would advance global well-being and prosperity.  At the same time, ASEM leaders agreed on the key role that the United Nations should play in maintaining international peace and security, he said, adding that it was a delight for him to report the successful service of Mongolia’s sons and daughters in United Nations peacekeeping missions, including in South Sudan where people needed help and support.

North-East Asia was home to many unresolved issues, with the Korean Peninsula being the last cold war stronghold, he said.  It was Mongolia’s firm position that the Peninsula should be free of nuclear weapons.  To resolve tension and conflict, it was crucial to end mistrust between concerned nations and for direct talks to take place more often.  The Ulaanbaatar Dialogue on Northeast Asian Security was called upon to promote trust, facilitate the exchange of ideas and find solutions to common concerns.  The task was not easy, but every Member State should strive for the right solution.