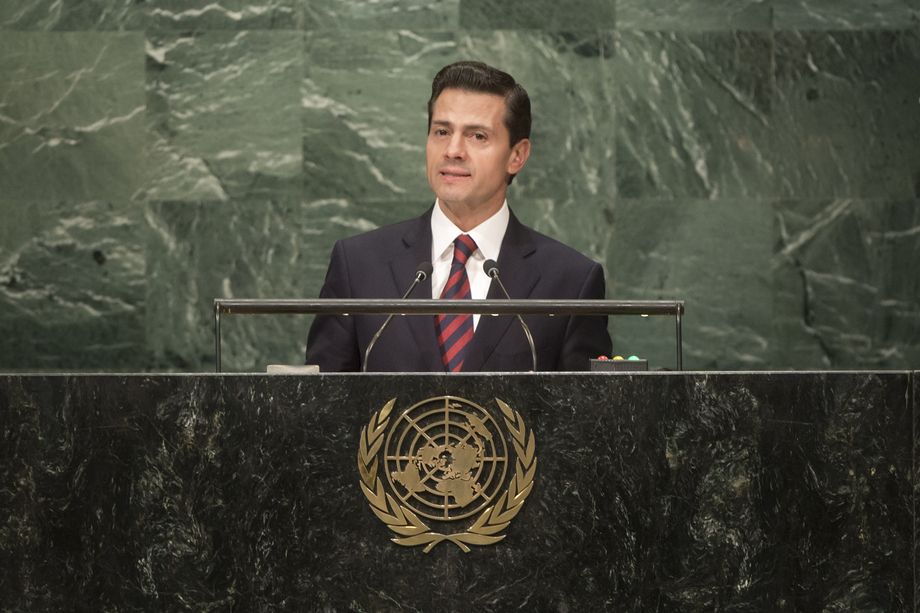 ENRIQUE PEÑA NIETO, President of Mexico, affirmed that his country had taken on implementation of the 2030 Agenda as a “commitment of the State”.  Structures were being set up at the national and regional levels to coordinate the activities of all actors, alongside mechanisms for monitoring progress.  Mexico was also working actively on the cross-cutting issues of migration and women’s empowerment.

Driven by a sense of urgency, Mexico had also ratified the Paris Agreement on climate change, aiming “to bring economic development into harmony with social inclusion and environmental protection”.  A law on energy transition required 25 per cent of electricity to be generated from clean sources, which would bring the total to 60 per cent in 2040.  Mexico would soon host the States parties to the Convention on Biodiversity and the Global Platform for Disaster Risk Reduction, he said.

The country confirmed its pacifist identity by promoting human rights, the pre-eminence of institutions and the rule of law in the region, he said.  In that vein, he applauded the Colombian peace agreement and reiterated calls to lift the blockade on Cuba.  Mexico would continue to be a proponent of disarmament and to work for a world free from the threat of nuclear weapons, he said.  Noting a “clear deterioration” in public support for democracy in Latin America due to dissatisfaction among the region’s people, he described the trend as a grave threat to peace and stability.  “Faced with this challenge, the world cannot fall into the trap of demagoguery or authoritarianism,” he emphasized.  “The only viable way ahead, the only true response to a demanding citizenry, is democracy itself.”

There was a need for greater transparency and better accountability on the part of Governments, he continued.  Achievements must be publicized, missteps acknowledged and the road ahead mapped out, with public participation.  For that purpose, public debate must be encouraged through the use of technologies that were increasingly available to the entire population.  Governments must foster societies that recognized pluralism, were ever more inclusive and participatory and in which all citizens enjoyed the benefits of development, he said, reaffirming Mexico’s commitment to achieving the Sustainable Development Goals through its strong commitment to democratic principles.