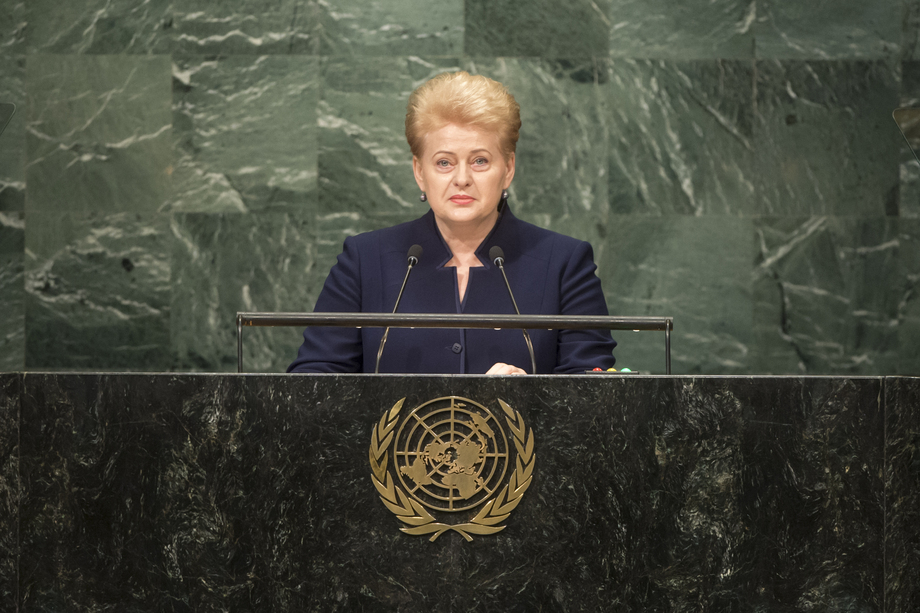 DALIA GRYBAUSKAITÉ, President of Lithuania, said that fighting terrorism and ending conflict could only be done with the full participation of women.  As well, implementing the Goals would also require special attention to women, who were left behind and ignored.  While both women and men were affected by poverty, lifting women out of poverty was more difficult.  Women faced gender-based discrimination and marginalization, she said, citing a report by the United Nations Entity for Gender Equality and the Empowerment of Women (UN-Women) that a woman earned 24 per cent less than a man and was more challenged in receiving a loan to start a business.

“The trend of poverty feminization has to change,” she stressed.  “By not allowing women to prosper, we condemn entire families to poverty.”  Moreover, while nearly half of the world’s agricultural work was done by women, if food was scarce, women were the first to suffer.  When public order broke down, a woman’s trip to bring water to her family could cost her life.  Expanding land ownership for women and providing credit would raise women’s incomes and make more food available for all.

In addition, for so many girls and women, the road to inclusive learning was an impossible dream, she said, noting that of the world’s 750 million illiterate adults, two thirds were women.  Girls were sold into early marriages and women into slavery.  Extremists burned down schools and killed teachers.  “That needs to change,” she said.  Educated women were a tremendous resource for the common good.  Girls must have access to education and be free to choose a profession.

While the challenges were immense, Governments could be part of the change by encouraging women to demand their rightful place in national parliaments, negotiation tables, science labs and company boards, she said.  They must ensure that nothing obstructed girls’ access to free quality education.  Abusive social practices must be combated, with laws that gave women and girls the power they deserved, and an investment in poverty reduction must be made.  “We cannot afford to fail in this challenge,” she stressed.  “To achieve this, we need everyone on board.”