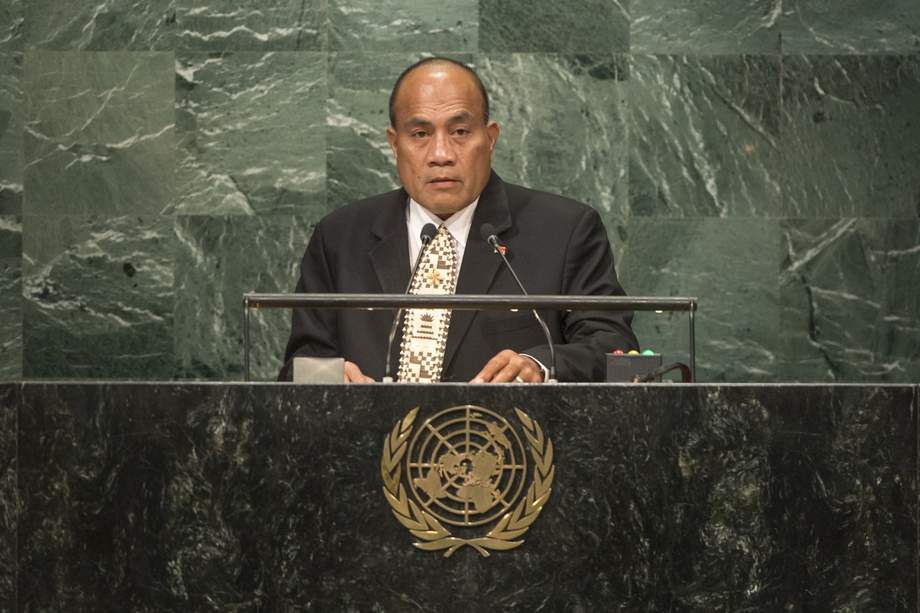 TANETI MAAMAU, President of Kiribati, said terrorism, transnational organized crime, nuclear testing, war, refugee and migrant flows, the silent killer of non-communicable diseases, along with existential threat of climate change all continued to undermine sustainable development.  Addressing those challenges required a change of mind-sets, paths and methods.  “And we must do this together,” he said, stressing that the future of Kiribati was at stake.  Each year, his Government attended the Assembly with constant cries to help it adapt to such impacts of climate change, including sea-level rise, storm surge and cyclones.  Villages had been forced to relocate, food crops had been destroyed and drinking water had been contaminated.

With La Niña, he said, water scarcity could trigger sanitation and other risks.  Kiribati was considering immediate options to help its people survive and he called on the United Nations for urgent help.  Following its signature of the Paris Agreement last year, Kiribati had deposited its ratification instrument on 21 September.  He commended China and the United States for their commitment to that process and urged other countries to help save those in need.  There was a huge risk for low-lying island nations, including Kiribati, which were prone to drought desertification and flooding.

As the 17 Goals were reflected in his country’s development plans, he urged directing assistance for capacity-building and technology transfer to the national level where it could make a big difference. It would be a challenge to compete for resources with multilateral agencies.  Taiwan had been a significant partner in achieving the goals of the global family.  “This must be acknowledged,” he said, through increased and more meaningful participation in international processes.  “We need our global transformation to be inclusive of those who can contribute to the effective implementation of the Goals,” he said.

Key principles of his Government, which he had led for six months, included good governance, transparency and accountability, he went on to say.  In its first meeting, Parliament had set up a select committee on anti-corruption, and just last week, had accepted the first reading of the Bill on the Leaders Code of Conduct, and passed a constitutional amendment to establish a new justice ministry.  As a Government, “we can transform our nation for the better if our actions, as leaders, are underpinned by strong principles of good governance, transparency and accountability” he said.