H.E. Mr. Matteo Renzi, President of the Council of Ministers 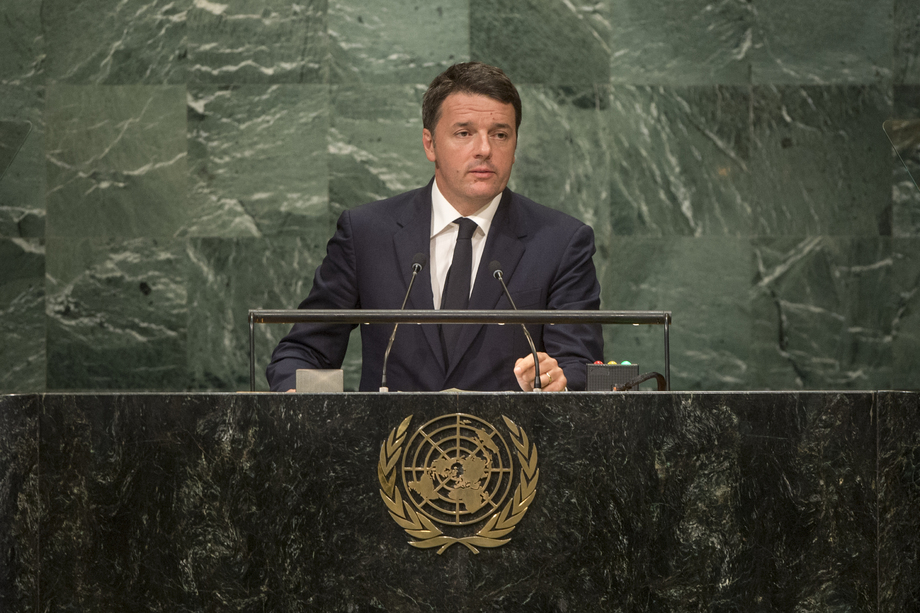 MATTEO RENZI, Prime Minister of Italy, echoed the earlier statement of the United States President, highlighting how the world had become divided between one of fear and another of courage, between anger and opportunity.  Terrorism menaced cities and everyday life, threatening not just conventional targets but a theatre, a museum, a stadium, a restaurant.  Pandemics and environmental risks were also real.  All of that made the future look like a moment of concern rather than hope, and the problems were not theoretical but real, in the faces of the victims and survivors.  Those challenges no longer had borders.

Italy, he continued, contributed its voice through the actions of its military and coast guard, who saved thousands and thousands of lives in the Mediterranean every day.  It contributed its voice through its leadership in culture and scientific research.  But it also gave through its history and values, including those of The Aeneid, in which Aeneas travelled not to return to his home but to a new land to create a new civilization.  “Without compassion for others, we are not worthy of being called a community,” said the Prime Minister.  The Mediterranean was the sea which thousands of people were crossing to escape war, poverty and hunger.  It was essential that Europe and the international community unite to deal with the issues of that part of the world.

The threat of terrorism had come not just from war zones but also from the abandoned and forgotten outskirts of cities; investing in human capital was essential to defeating this terrorism, he said.  Italy had, in response, approved a law matching every euro for security and policing with one euro for culture and education.

Italy would tackle the challenges of 2017 by participating in the Security Council in a year that would also see a new Secretary-General, he said.  Italy would also host on 25 March 2017 the countries of the European Union at the sixtieth anniversary of the signature of the treaty.  And Italy would also host the Group of 7 in Sicily, a place noted for its culture and values and history.  Italy planned to use the Group of 7 meeting to reflect on cultural values and to highlight the challenges of food — both food insecurity and health awareness.  Many of the issues facing the Security Council, Europe and the Group of 7 were from the same matrix.  It was essential to create a world based on hope, not resentment, hatred and fear.