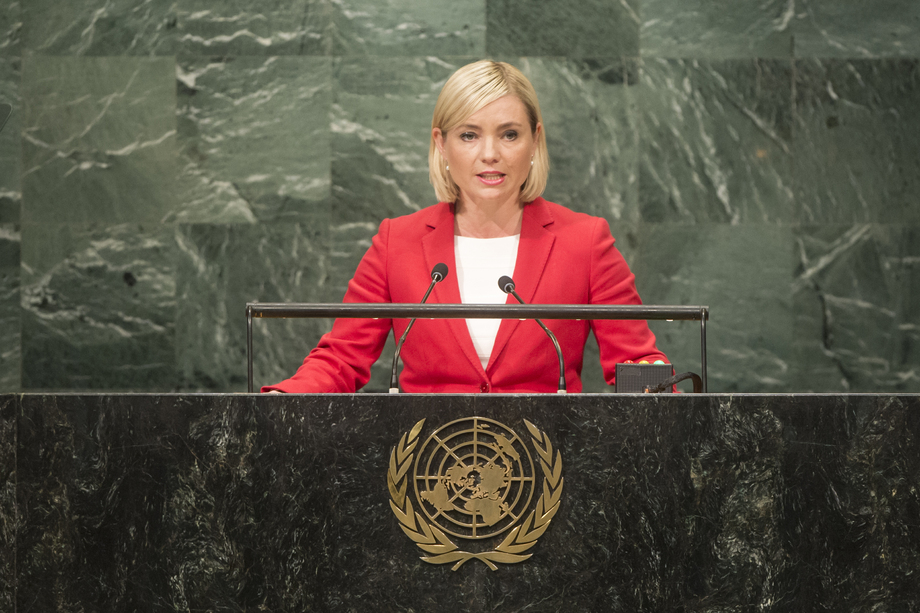 LILJA DÖGG ALFREÐSDÓTTIR, Minister for Foreign Affairs and External Trade of Iceland, addressed a number of her country’s key priorities, including the migration crisis, climate change, minority rights and the protection of international law.  Recalling the mass migration of Icelanders to North America at the end of the nineteenth century, she called upon the international community to “step up to the plate” in response to the current migration crisis, saying Iceland would have taken in 100 Syrian refugees by the end of 2016.  In proportion to its size, that number would have been equivalent to 100,000 refugees in the United States, she observed.  Emphasizing the need to resolve several protracted conflicts in the Middle East, including the Israeli-Palestinian conflict, the crisis in Syria and the dispute over Western Sahara, she said injustice and the failure of governance were driving them.
She said education was a precondition of good governance and a key pillar of her country’s development cooperation.  On the issue of minority rights, she stressed the need to protect the rights of women, as well as those of lesbian, gay, bisexual and transgender individuals.  Pointing out that she was one of only 30 female foreign ministers around the world, she underlined how far the world still had to go and welcomed in that regard the strong field of female candidates for the position of United Nations Secretary-General.  Regarding the Paris Agreement on climate change, she said that Iceland had “handed over its instruments of ratification earlier this week” and aimed to present its progress in two years’ time.  Finally, she expressed concern about the Democratic People’s Republic of Korea’s nuclear weapons programme, saying it was in violation of international law and threatened the security of its own people, the wider region and the world.  “For a small and peaceful country like mine, international law is our sword, shield and shelter,” she said.