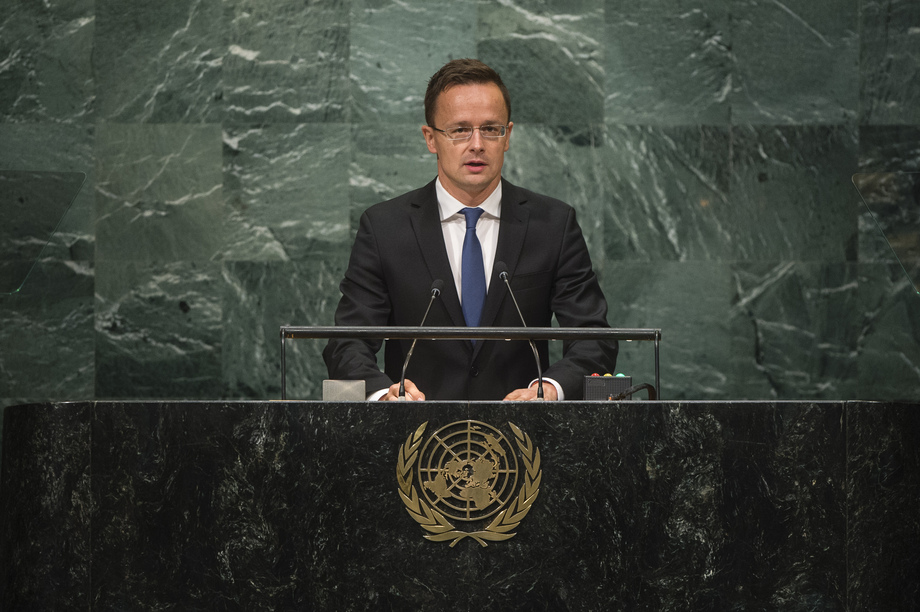 PÉTER SZIJJÁRTÓ, Minister for Foreign Affairs and Trade of Hungary, said that world order had been changed by three factors:  the spread of terrorist organizations, the destabilization of key and vulnerable regions of the world and the movement and displacement of some 65 million people.  He called for the elimination of global terrorism and said that until then there would be no stability in the Middle East, Christian communities would continue to be threatened and the migratory pressure on Europe would continue.  “We have to destroy the business models” of human traffickers which had caused the death of thousands,” he continued.  It was important to change migratory policies to inspire people not to violate borders and move to countries thousands of miles away.  “Instead of emotional debates, we need debates based on common sense,” and instead of accusing and bashing each other, world leaders must stand on the stability of international law.  The right to a safe life was a fundamental human right but choosing a State where one wants to live was not a fundamental human right.  There would be no excuse to violate borders of safe and secure countries.

Hungary was among 23 countries that had sent troops to fight ISIL, he continued.  There were 143 Hungarian men and women serving in Iraq, and his country had sent ammunition to the Peshmerga and soon would begin carrying out training of the Iraqi army.  His Government had established an office on the persecution of Christians to address threats that group faced and to ensure that criminal acts were punished.  Furthermore, the Parliament had established strict regulations against human traffickers.  “Hungary put security of Hungarian people to first place and we will not allow mass violations of our borders,” he said.  Migratory policies that considered all migrants refugees had failed.  Migratory policies that had taken in thousands against the wishes of their own people had failed.  Uncontrolled and unregulated migratory patterns were a threat to peace and security.  “We have to help people to stay as close to their homes as possible so that they can return to their homes as soon as possible,” he said, stressing the need to help Lebanon, Turkey, and Jordan in dealing with millions of people they had taken in.  “Europe would not be able to take such a challenge,” he added.  It was also important to link development programmes to conditionality so that Governments were responsible in not creating the conditions for their people to leave their homes.  Central Europe faced many challenges and a Secretary-General from the region would help it to overcome its historic challenges.