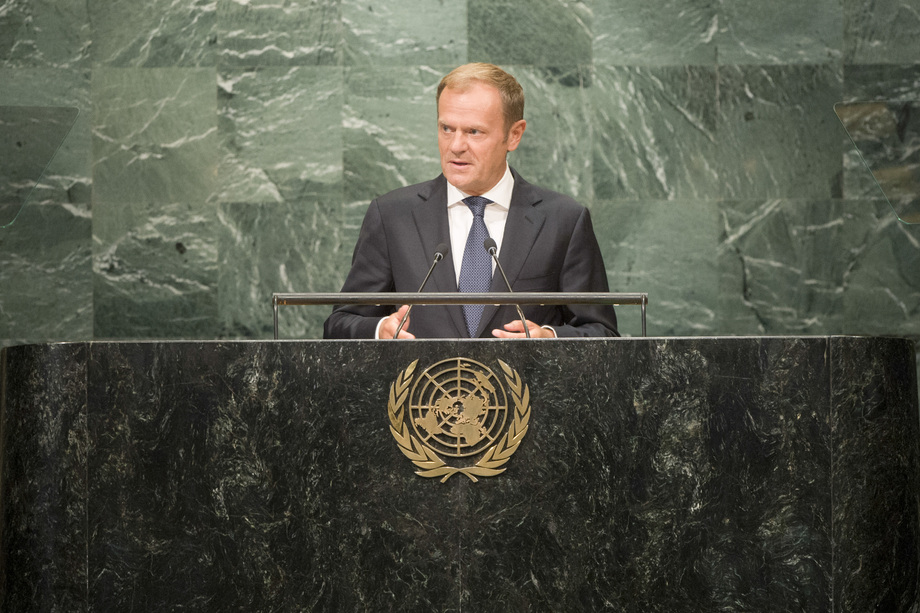 DONALD TUSK, President of the European Council of the European Union, said that his organization had always promoted a free world governed by the rule of law and peace, rather than one beset by conflict, mistrust and fear.  No challenge highlighted the power of fear and conflict more clearly than refugee protection and massive displacement across borders, a crisis, which, over the past few months, the European Union had confronted.  The Union’s actions had been driven by empathy and a readiness to help those in need and its commitment to assist would remain a top priority.  Having spent billions of euros in humanitarian assistance, it would spend much more in years to come.

The European Union’s main goal had always been peace, he said, whether such peace was being threatened by civil wars in Africa or by nuclear testing in Asia.  Peace on Europe’s own borders had been compromised, as well, when the Russian Federation attacked Ukraine.  Libya, Syria and Afghanistan themselves were also in danger.  In a few weeks, the European Union, together with the Afghan Government, would host an international conference on Afghanistan in Brussels, where the world could show support for stability in the country and region as a whole.

Building a global strategy to fight terrorism was key to both preventing attacks and undermining terrorist financing, he said, noting the efforts of the Union in that regard.  He urged the international community to make better use of the United Nations to fight the scourge together.  The Union was also one of the largest donors of development aid that addressed various problems, including insecurity, poverty, climate change and uncontrolled migration.  In addition, with a policy in place for four years, the Union was fully committed to fighting climate change.  Two countries with the highest emissions had already ratified the Paris accord, demonstrating that an early readiness to take responsibility for a common future.  Expressing the wish that such an attitude would prove contagious, he said it brought back a sense of direction, confidence and hope.