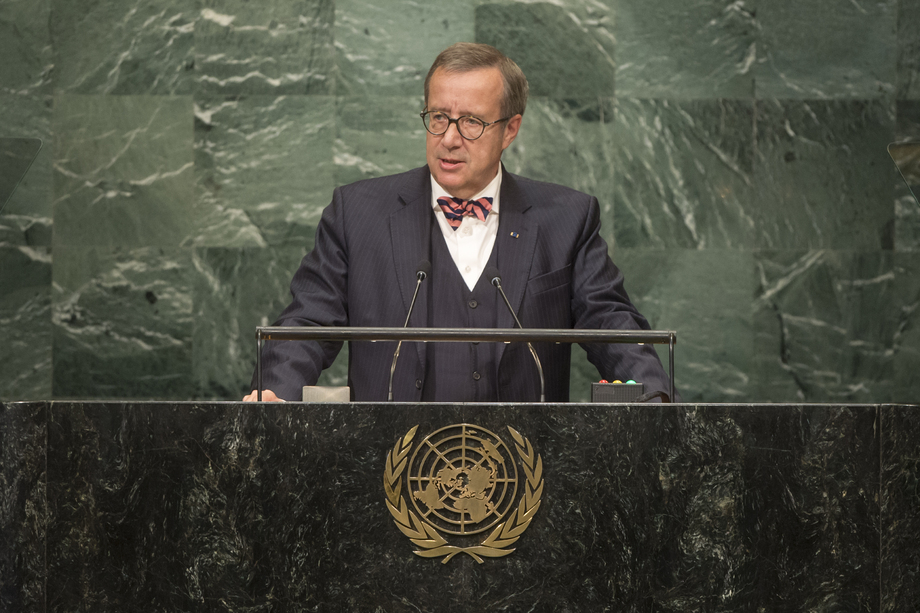 TOOMAS HENDRIK ILVES, President of Estonia, said that this was his tenth and final time addressing the General Assembly.  His first address had focused on climate change, conflict and cyberattacks, and today the issues were largely the same, only the sense of urgency had been ratcheted up.  Estonia firmly believed in a rule-based international order, and the only international organization global enough to achieve that was the United Nations.

Estonia had warned after Russia’s invasion of Georgia in 2008 that international law could not be applied selectively, he continued.  Six years later, the world had witnessed a repeat performance in Ukraine, and Russian aggression in that country continued.  For the first time since the Second World War, borders in Europe had been changed by force.  Unless the United Nations did more to enforce international law, it would over time lose relevance.  The Organization had to be the first place to come for a solution, not the last stop when all other options had been exhausted.

The issue of migration was today a crisis, but it was not unprecedented as some had claimed, he said.  In the Europe of 1946, Germany alone had 12 million internal refugees and another 12 million displaced persons of 20 nationalities, and many of its neighbours were in scarcely better shape.  And yet, humanity had prevailed.  In three years, the United Nations had spent the equivalent in today’s sum of €50 billion to resolve that crisis, which took political will and courage and far more money than the world today was willing to spend.  Today, the root causes to the complex problem of migration had to be addressed and nations had to fulfil their obligations.

If the world did not act on ongoing conflicts, those conflicts would breed terrorism without boundaries, he noted.  For that reason, Estonia participated in the global coalition to counter Da’esh, supported the International Criminal Court, and believed in the critical importance of countering impunity.  In 2005, United Nations Member States had committed to the principle of the responsibility to protect, but a solution to the Syrian conflict had proven beyond the Organization.  Much of the blame was laid at the feet of the Security Council.  Reform of that body’s working methods was important, especially to represent small nations who were so often the victims of conflict.  Estonia, for example, had never served on it.

Continuing, he said that free media, especially in the digital age, was an integral, inseparable part of a modern democratic society, yet around the globe opposition voices faced reprisals, jail and violence.  “The right to freedom of expression online and offline is for Estonia a fundamental issue,” he said.  The digital technology was a liberating force, yet some would use it to control their citizens.  The protection of human rights and the rule of law must keep pace with technological advancements.