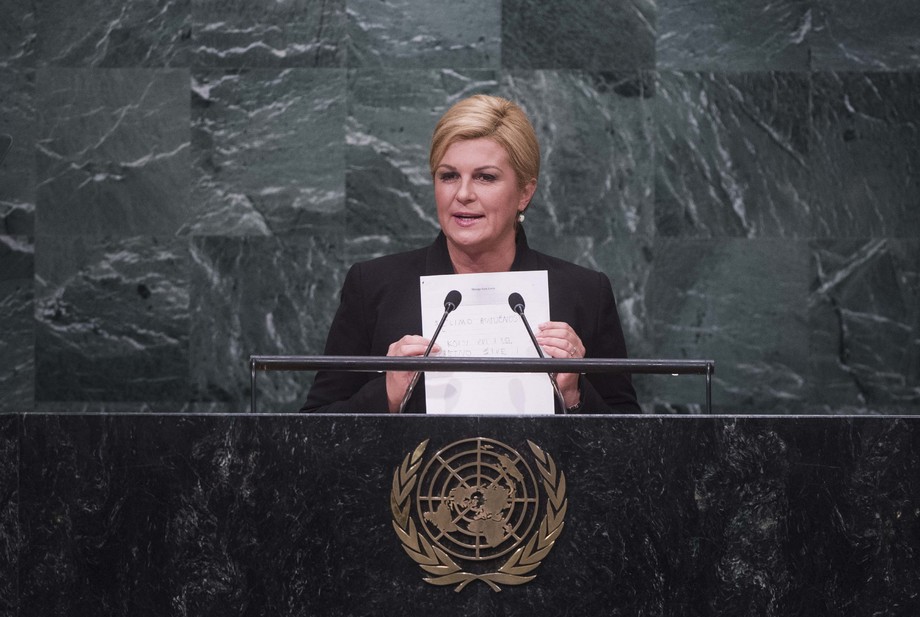 KOLINDA GRABAR-KITAROVIĆ, President of Croatia, said that climate change was a “powerful weapon of mass destruction” and that it was getting out of control.  The phenomenon was also a risk multiplier of other global security challenges, fuelling large migratory flows and regional instabilities.  Consequently, she underscored the importance of the Paris Agreement entering into force as soon as possible.

On the subject of the refugee crisis, she especially pointed out the plight of over 50 million children who had been displaced, in addition to the 60 million who did not have access to primary education.  States were therefore confronting a monumental challenge, as they had to decide whether to opt for open or closed societies.  The double standards of the international community and its “hypocritical approach to the tragedy” in Syria must end, she emphasized.  The response from Member States to that crisis should be two-fold, focusing both on improving conditions in host countries and for the populations who had been left behind in countries of origin.

In a distressed world, gender inequality created great obstacles for women and girls in all social realms, she went on to say.  That inequality was the most pervasive form of global inequality, and the 2030 Agenda would not succeed without the inclusion of women in economic, political and social life.  That inclusion would ultimately signal to the global community that women were agents of peace and security.  To that end, an increase in the number of female peacekeepers would help enhance the work of the United Nations in the areas of conflict resolution, peacekeeping and combatting sexual violence.

Going forward, the international community must reinvigorate its determination to become a nuclear-test-free world, as “large parts of the UN disarmament machinery are stalled,” she noted.  The 2015 Non-Proliferation Treaty review remained a case in point.