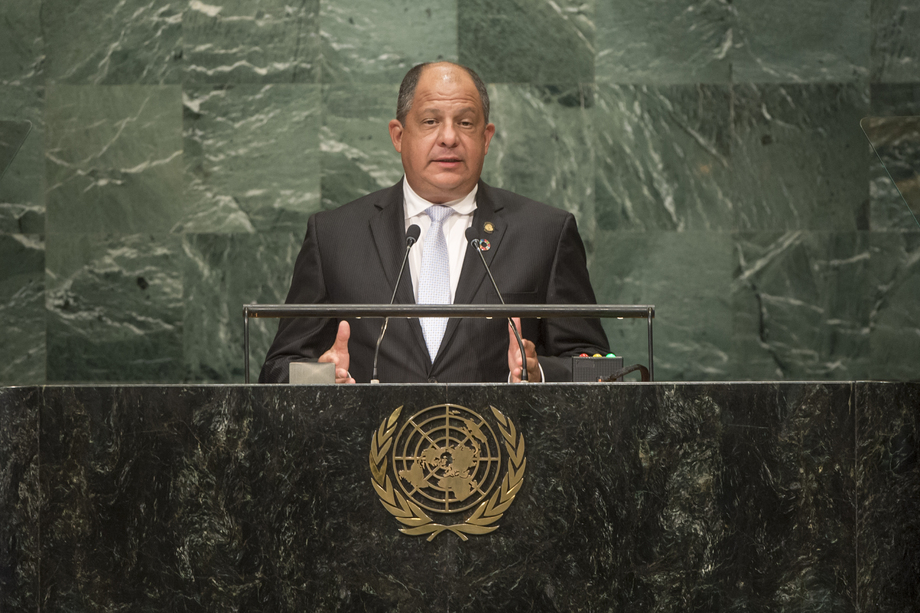 LUIS GUILLERMO SOLÍS RIVERA, President of Costa Rica, said little progress had been made to resolve the worst refugee and migrant crisis since the Second World War.  “We are not fulfilling our commitment to leave no one behind,” he said, adding that little attention had been paid to the tragedy of thousands of migrants travelling across Latin America from south to north.  Floods, droughts and rising sea levels would force more people to be displaced or to migrate.  Escalating tensions, conflict and the use of force only benefited those few who profited from suffering and death.  It was in the national interest of all States to strengthen the international system, he said, adding that the United Nations was at the centre of that effort.

He shared the conclusions of the draft report of the High-Level Panel on the Economic Empowerment of Women, which he co-chaired at the invitation of the Secretary-General.  Its recommendations included breaking down stereotypes and challenging rules that limited women’s access to work or which devalued their labour.  It also called for reforming discriminatory laws and regulations, and ensuring decent working conditions for domestic workers.  Women’s voices should be heard through greater participation in leadership in business and political decision-making, he said, adding that such empowerment was a necessary step towards equality in other aspects of the relationship between men and women.

Noting the work of Christiana Figueres of Costa Rica during her term as Executive Secretary of the United Nations Framework Convention on Climate Change, he said the Paris Agreement must enter into force immediately.  Costa Rica would soon ratify that document, and it aspired to have a carbon neutral economy by 2021 as well as a 25 per cent reduction in emissions by 2030 as compared with 2012.  “Our planet needs our care and this care must be all-encompassing,” he said, adding that Costa Rica was committed to processes within the United Nations framework to protect oceans and marine resources.

His Government condemned all forms of terrorism, he said, adding that the fight against terrorism must be carried out in strict observance of international human rights, humanitarian and refugee law.  In that context, it was time for countries that had not yet done so to ratify the Arms Trade Treaty without delay.  Fewer weapons would be diverted to extremist groups if more States implemented the provisions of that instrument.  He welcomed efforts towards full diplomatic relations between the United States and Cuba, as well as the signing of peace agreements in Colombia, and expressed concern over missile launches and nuclear exercises conducted by the Democratic People’s Republic of Korea.  The General Assembly had the power to define the term of office of the next Secretary-General, which should be for a single period of seven years.  The Security Council’s endorsement of more than one candidate would increase the inclusiveness, transparency and legitimacy of the appointment process.  He also said the next Secretary-General should be female, noting that six of the candidates — including one from Costa Rica — were “extraordinary women”.