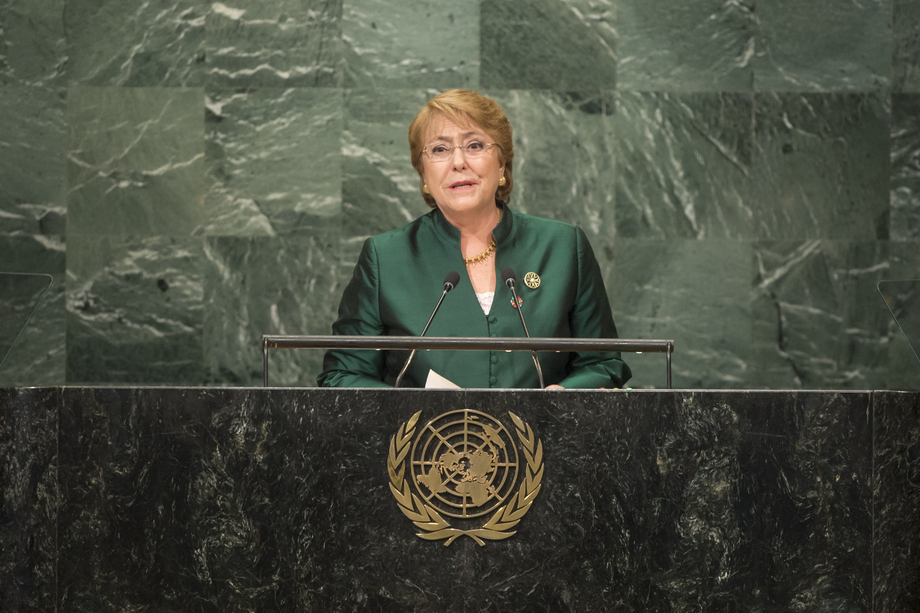 MICHELLE BACHELET JERIA, President of Chile, said world economics had led to a global slowdown, depriving the world’s population with the well-being it desired.  Yet, thanks to new technology, people today were more aware and empowered, and were expressing in their daily lives, places of work and families’ health the negative effects of inequitable development.  That was the main basis for discontent in various parts of the world.

The world was also facing an environmental crisis with economic and climatic effects, she said.  In addition, violence and armed conflict in many parts of the world had increased precariousness, displacement and migration.  People were disillusioned about promised development, which was still beyond reach.  There was a growing schism between the representatives and the represented, as well as a lack of trust in national Governments and multilateral forums, which were failing to tackle the priorities of common citizens in a timely or in-depth manner.

The Sustainable Development Goals illustrated that the international community knew it must make far-reaching changes and implement them with concrete actions, she stated.  Now political will in each country and multilateral forums must be summoned to overcome inertia and individual interests.  Multilateral dialogues at regional and global levels must be engaged, calling for realistic but demanding commitments.

Chile was a medium-sized country that was not yet fully developed, but was sitting at the edge of modernity, she said.  At regional and international levels, it was seeking a common agenda that would give Latin America strength as a bloc and region.  Her Government was working on integration with Mexico, Colombia and Peru in the Pacific Alliance, which already had 49 observer States.  The two integration mechanisms, the Pacific Alliance and the Southern Common Market (MERCOSUR), aimed to promote a better Latin America, strengthening cooperation and insisting on the importance of both national development and international relations.