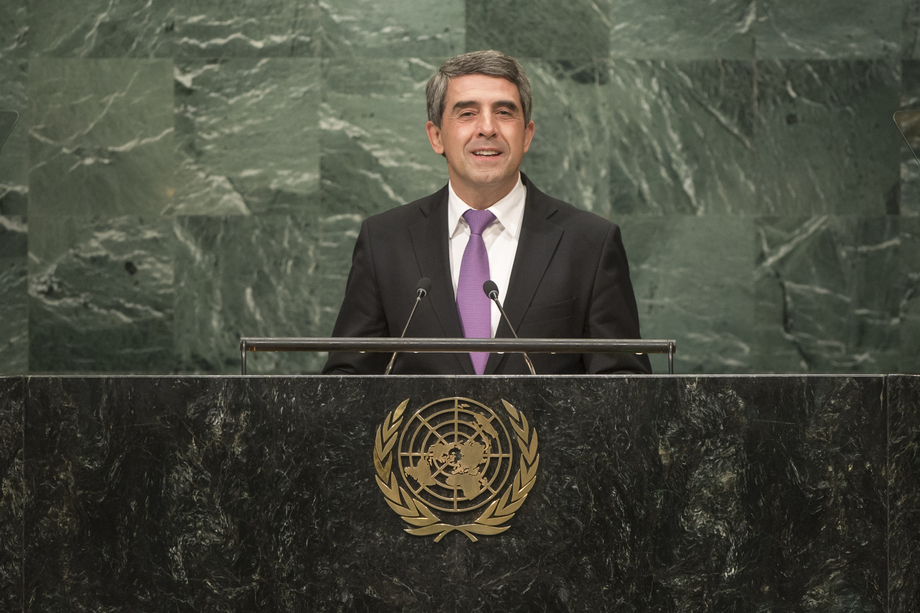 ROSEN PLEVNELIEV, President of Bulgaria, said the implementation of the Goals was critical to make the world a better place to live.  Yet, national borders and international principles were being challenged like never before.  “No one is immune and no one is safe,” he added, emphasizing that violations of human rights were occurring every single day.  Protracted conflicts were causing many humanitarian crises. Although Europe was a symbol of hope, countries that were located closer to conflict zones, including Bulgaria, faced unprecedented challenges.  Migration had to be managed through collective global efforts with a focus on protecting the most vulnerable, specifically women, children and the elderly.  Partnerships between countries of origin and host countries must be strengthened.

“It is a children’s crisis,” he said, urging world leaders to “hear their voices” and honour their full rights as recognized in the United Nations Convention of the Rights of the Child.  Crisis management efforts must include helping conflict-stricken countries to recover.  His country would continue to propose initiatives to enhance connectivity and dialogue. The European Union had unique legitimacy because of its settlement of differences and unprecedented shared vision among so many countries.  Leaders all over the world and in all sectors needed to not just register but also resolve conflicts.  To reconfirm, not to renegotiate the principles of the United Nations was critical.  Bringing back peace to Syria could only be possible through a Syrian political process that took into account the aspirations of all sides.

“We do not want to go back to the time when great powers allocated their spheres of influence,” he went on to say, emphasizing that any attempt to destabilize Ukraine was unacceptable.  Calling for the full implementation of the Minsk Agreement, he stated that his Government would continue to not recognize the annexation of Crimea.  He also expressed support to the North Atlantic Treaty Organization (NATO)-led reconciliation efforts in Afghanistan.  Turning to the Middle East, he said new and fresh initiatives were needed to resolve the Israeli-Palestinian conflict; a two-State solution was the only just and realistic way to resolve the aspirations of all sides.  He voiced his support for Iran taking steps to achieve stability in the region and said that the Democratic People’s Republic of Korea nuclear programme threatened international peace and security. The United Nations had an important role to play in coordinating counterterrorism action and strengthening international cooperation.

Preventing the spread of radicalization and the destruction of cultural heritage was essential and to that end, UNESCO played a key role.  Bulgaria for its part was actively engaging civil society, young people, and the private sector and was focusing on building up the “green-economy”.  Bulgarian schools had even introduced curricula to teach young kids about sustainable development.  “Children should be at the heart of global action,” he said, adding that Bulgaria was proud to make the well-being of children and future generations a centrepiece of its national policies.  Bulgaria was also actively engaging in promoting gender equality, he said, adding that women in his country held executive positions both in the Government and the private sector. “The time has come for a capable and respectable woman from Eastern Europe to lead the United Nations,” he added.