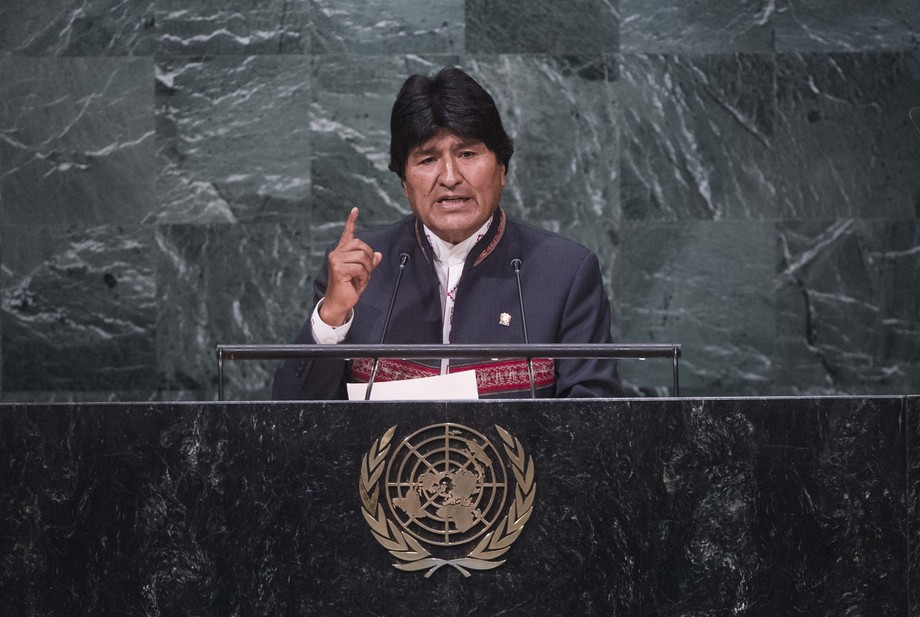 EVO MORALES AYMA, President of Bolivia, said that, according to United Nations data, 94 per cent of global wealth was concentrated in the hands of 20 per cent of the world’s population, a reality that was “the true face of capitalism”.  He added that 2016 had been the hottest year on record, every year was hotter than the one before it and Bolivia was suffering from one of the worst droughts in its history.  He called for States to remain alert to prevent the “barbarism of the capitalism”, which would transform the Paris Agreement into one used for blackmail.

Walls had been constructed everywhere, he continued, and one out of every 100 people was a refugee or was displaced because of imperial invasions, wars or global warming.  Israel’s expansionist and war-mongering policies were one of the greatest expressions of barbarism in the modern world.  The United Nations needed to “fully recognize the State of Palestine” and stop the “brutal genocide” against the Palestinian people.  His country vigorously rejected the sanctions against Cuba and he stressed that it was not enough to restore diplomatic ties.  The United States must indemnify Cuba from the blockade and restore Guantanamo to Cuban territory.  He commended the peace agreement signed in Colombia and Cuba’s leadership in facilitating it.  The agreement was in compliance with the Community of Latin American and Caribbean States’ agreement to create a single peace zone in the region.

Bolivia, he said, led Latin America in economic growth, achieving it alongside public investment and a significant reduction in poverty while building equality.  That could not have been possible without steps such as nationalizing natural resources and strategic businesses.  He warned that imperialist interests were creating political destabilization in the region and condemned such foreign interference in Venezuela, hailing the people’s revolutionary struggle under Nicolás Maduro.

He expressed concerned over the rejection of actions of the Organization of American States’ Secretary General, which represented a breach of United Nations policies.  That Organization must represent Latin America and not serve as a spokesperson of the United States.  He went on to observe that, in Bolivia, where there were no military bases, there was far less drug trafficking without American interference.  He said that “terrorism and drug trafficking are twins,” serving North American interests around the world.

On relations between his country and Chile, he said that Bolivia had in good faith trusted legal commitments put forth before the International Court of Justice over returning it to its maritime state.  The solution should be resolved in a peaceful manner to allow true integration of the people from the two countries.  He invited Chile to put an end to one of the longest conflicts in Latin American history, which would also contribute towards an integration of Latin America.