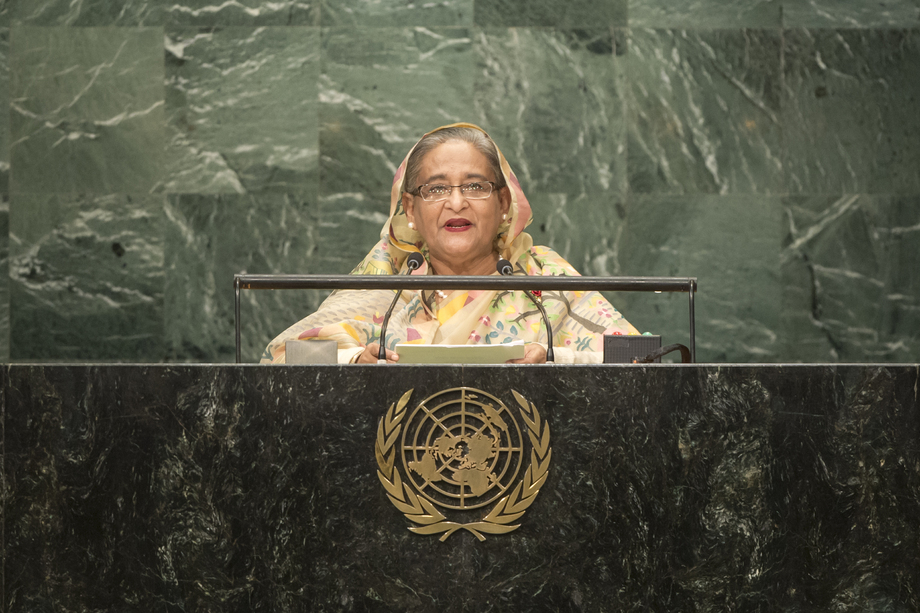 SHEIKH HASINA, Prime Minister of Bangladesh, said the end of poverty, hunger, disease, illiteracy and unemployment was in sight.  Yet the world was not free from tension and fear, she said, citing the situation in Syria.  The outcome of the Summit for Refugees and Migrants should help redefine perceptions and realities of human mobility.  Turning to the Sustainable Development Goals, she said internationally agreed commitments for the least developed countries must be fulfilled.  Noting that broadband connectivity was a key enabler of economic development that should reach every citizen in the world, she invited world leaders and others to join hands to make that possible.

Bangladesh had seen one of the world’s fastest poverty reduction rates, but climate change threatened many development gains, she said, adding that she hoped large carbon-emitting countries would ratify the Paris Agreement soon.  States had a shared responsibility to ensure the judicious and equitable use of water.  Sustainable development would not be tenable without the participation of women, who in Bangladesh were increasingly becoming an integral part of development endeavours.

No country seemed immune from terrorism, she said.  Terrorists had no religion, caste or creed.  Root causes needed to be identified, and strong action taken against the mentors, masterminds, abettors, financiers, arms supplies and trainers of terrorists and extremists.  As a victim of terrorist attacks herself, she said she had a zero tolerance approach to the problem.  With the rise of certain international terrorist entities, it appeared that some local fringe elements in Bangladesh had regrouped and rebranded themselves.  “We are now in battle with this new wave of terrorism,” she said, with her country undertaking programmes to awaken people against radicalization.  Women, youth, families and communities could be vanguards in offsetting extremism and radicalization, she said, urging the world community to plug the sources of funding, weapons, and moral and material support for militants and terrorists.