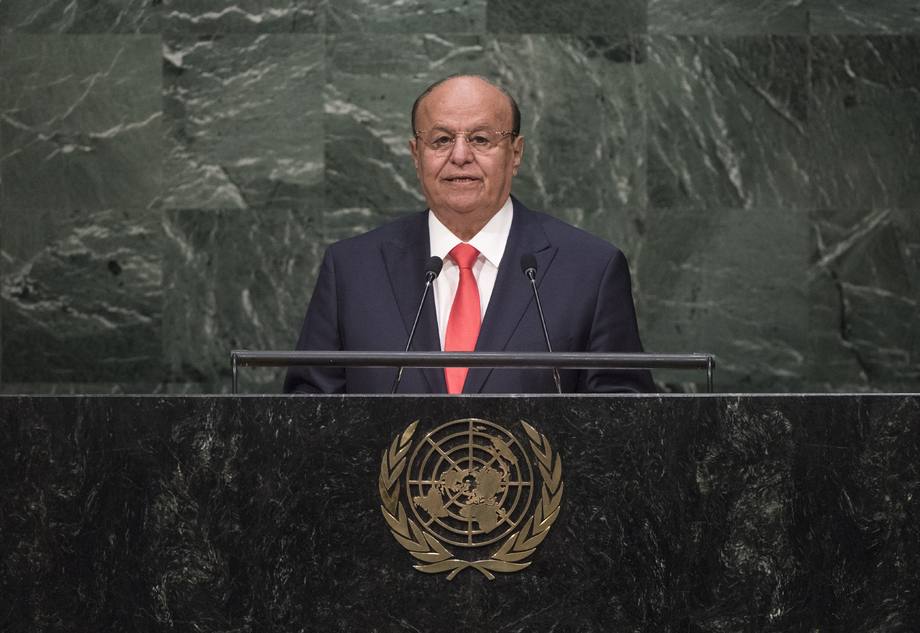 ABDRABUH MANSOUR HADI MANSOUR, President of Yemen, said the city of Aden had recently been liberated from the criminal Houthi militia.  However, the tragedy continued in other cities.  Three years ago, he had spoken about the peaceful transition of power in Yemen before the General Assembly.  He had also warned that Iran was hindering that process, and that it was training Houthi militias and providing them with weapons.  Indeed, his country had undergone a peaceful, transparent political transition as predicted; nevertheless, Houthis had undertaken a political and military coup d’état as an attempt to impose the Iranian model through the use of force.  Citizens were surrounded and killed, and children were conscripted into armed militias.  Schools and public buildings were turned into military warehouses.

The Houthis were “given every chance” and included in the national dialogue, yet they continued to hold on to their weapons, he said.  Indeed, the coup had taken place despite Yemen’s positive approach to the situation.  Acting under Article 51 of the Charter, Yemen had appealed to neighbouring countries to help them tackle the Houthi militia.  The response had been a courageous one, with Saudi Arabia acting with particular determination.  “We find ourselves mixed in this battle for the legitimacy of the State, to prevent the country from falling into the hands of Iran,” who wanted to see the destruction of Yemen.  He welcomed the resistance of Yemen’s citizens, who had also fought against the Houthis.

Greater effort was needed internationally to alleviate human suffering and to ensure that the Yemeni crisis was not forgotten, he went on.  While the United Nations had announced its annual humanitarian appeal for Yemen, contributions fell short, and covered only a meagre number of needs.  He appealed to donor countries to fulfil all commitments to his country.  Yemen had cooperated with all authentic efforts of the international community, including those of Secretary-General Ban Ki-moon and and his Special Envoy under Security Council resolution 2216 (2015).

Calling on the Houthis and related militias to lay down their arms and implement that resolution, he expressed hope that the efforts of the United Nations would be met with success.  Terrorism was a true threat for States.  Yemen had endeavoured to combat terrorism, conducting a “determined drive” against that scourge in partnership with friendly countries.  Given the country’s geographical location, its stability was important for the region and the world.  “We shall not allow the Houthis, nor anyone else, to repeat the Iranian experience in Yemen,” he stressed.